The Bold and the Beautiful Spoilers: Tuesday, March 5 – Zoe Catches Flo With Hope – Liam Gets Some Tough Advice 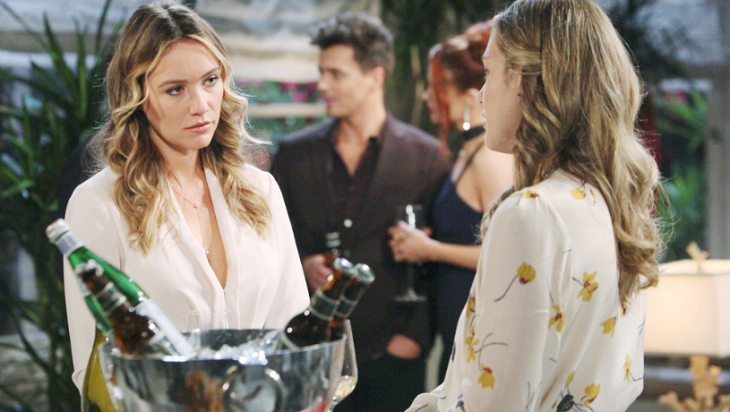 The Bold and the Beautiful (B&B) spoilers for Tuesday, March 5, tease that Hope Spencer (Annika Noelle) will be startled and curious after Florence “Flo” Fulton (Katrina Bowden) announces that she has something to tell Hope. Flo’s just learned that Hope is the same “Hope” that Reese Buckingham (Wayne Brady) duped into believing that her baby was dead, and Flo feels terrible. She’ll be on the verge of telling Hope the whole story.

Flo Wants To Tell All

Flo will stammer and struggle in her attempt to tell Hope the truth, but she won’t get far. It seems that Zoe Buckingham (Kiara Barnes) will appear on the scene and break up their conversation. Zoe will feel that she has no choice but to formally introduce Hope and Flo. She won’t like it, but at least she’ll be there to control the meeting and prevent Flo from saying anything she shouldn’t.

This will be interesting… #BoldandBeautiful pic.twitter.com/fBAx9x5jE8

Of course, Zoe will feel terrible for deceiving Hope, whom she genuinely likes and respects, but she can’t risk her dad going to jail. Look for Zoe to tear into Flo once Hope is gone for her near confession. Zoe will probably insist once again that Flo get out of Los Angeles and go back to Las Vegas and away from anyone else that she might bump into.

Meanwhile, on the new B&B episode on Tuesday, March 5, Liam Spencer (Scott Clifton) will continue his discussion with Wyatt Spencer (Darin Brooks) at the cabin. Wyatt shocked Liam with the suggestion that perhaps deep down he wants to reunite with Steffy Forrester (Jacqueline MacInnes Wood) and be a full-time dad to Kelly Spencer (Chloe Teperman and Zoe Pennington) and Phoebe Forrester (Isabella de Armas and Redford Prindiville).

Liam will be further shocked when Wyatt suggests that Liam give serious consideration to Hope’s request that Liam leave her immediately and reunite with Steffy.

Of course, Liam just doesn’t see how that would be feasible right now, as he won’t even consider leaving Hope so soon after they lost Beth Spencer. But maybe Wyatt’s words will stick with Liam and he’ll give the matter some thought.

The Bold and the Beautiful Recap For Monday, March 4: Steffy Needs Help– Flo Has a Confession– Liam Leans On Wyatt