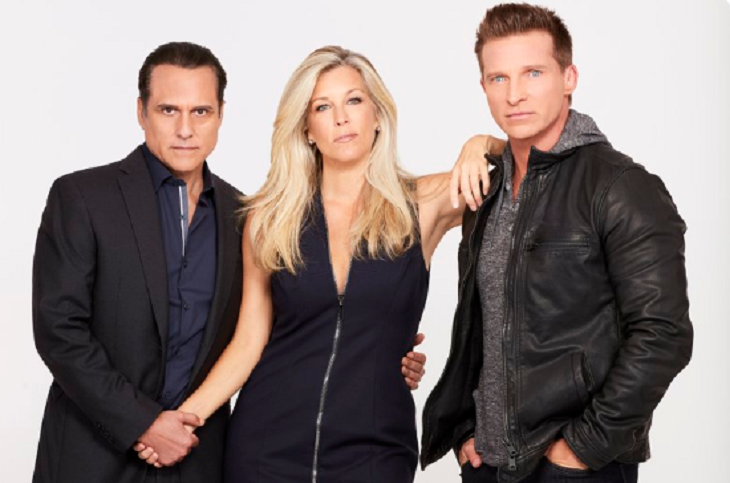 General Hospital (GH) spoilers tease another day of drama and excitement on Wednesday’s episode of General Hospital! First, Dr. Kim Nero (Tamara Braun) talks to Julian Jerome (William DeVry) and asks him, “Why does something have to be wrong for me to come to see you?”

Maybe Julian is just playing catch-up on showing concern, but Kim’s not quite taking it the way he means.

Then, over to Kim’s son Oscar Nero (Garren Lake Stitt) and Josslyn Jacks (Eden McCoy), who are staying in a cabin at Niagara Falls with Cameron Webber (William Lipton) and their friend Trina (Sydney Mikayla), Oscar tells Josslyn, “I love you, Josslyn Jacks!”

They were stuck there overnight, and instead of boys with boys and girls with girls, it appears the boys were boys and the girls were girls, and Oscar and Joss might have marked one more thing off his “bucket list”!

Let’s hope Joss doesn’t turn up pregnant at the same time as her mother, who hopefully won’t lose her baby. That would just be too many hormones in the same household at the same time for Sonny Corinthos (Maurice Benard) to handle!

In the other room of the cabin, Cameron talks to Trina, asking her, “What am I supposed to do?”

Apparently, they can’t get back in time for him to do his community service! That could get him in some more trouble with the law, he’d be violating his probation for getting caught in the middle of a pot deal, and he might have to spend time in “juvie”, or in other words, juvenile detention, the teenage version of jail.

Curtis Ashford (Donnell Turner) gives her the message that Franco Baldwin (Roger Howarth) called her about, and tells her, “All along it’s been Ryan Chamberlain” (Jon Lindstrom)!

Mayor Laura Collins (Genie Francis) is elsewhere in GH, talking to Dr. Hamilton Finn (Michael Easton) and his half-brother Detective Harrison Chase (Josh Swickard), insisting to them, “I’ve got to see the Police Commissioner!” Unfortunately, Jordan may not be allowed anyone but family due to her serious condition, but maybe this time Finn will bend the hospital rules since Chase bent the police protocol rules in cracking Jordan’s phone.

When we last saw Laura and Chase, they were headed for Ferncliff to rescue her husband, the real Kevin Collins, but somehow Jason Morgan (Steve Burton) seems to have beaten them to it. They seem to be at Ferncliff since Kevin is still scruffy and dirty, and Jason’s talking to him about Carly, who he probably figured went there looking for information about Wilson Ritter/Todd Wilson! Kevin asks where she is, and Jason nervously says, “I don’t know!”

Speaking of Ryan Chamberlain, who used “Todd Wilson” as an alias in Texas and changed the Ferncliff records to “Wilson Ritter” for Kevin when he pulled the big switcheroo, he and Ava Jerome (Maura West) have made it to their honeymoon cabin which apparently is in the same place as the teens’, since it has the same décor! She’s seductively waiting in bed, asking him, “I hope you don’t mind starting our honeymoon tonight!”

The teens may still not be out of the woods yet where Ryan’s concerned, they could still cross paths and get in trouble; Cam and Trina were going to watch some tv….what if they see a news bulletin about Ryan, and Cameron confronts him?

That’s all for Wednesday, March 6 General Hospital preview; keep watching GH and check spoilers frequently to see what happens next!