The Bold and the Beautiful Recap For Tuesday, March 5: Zoe Lashes Out At Flo– Steffy’s Still In Love With Liam 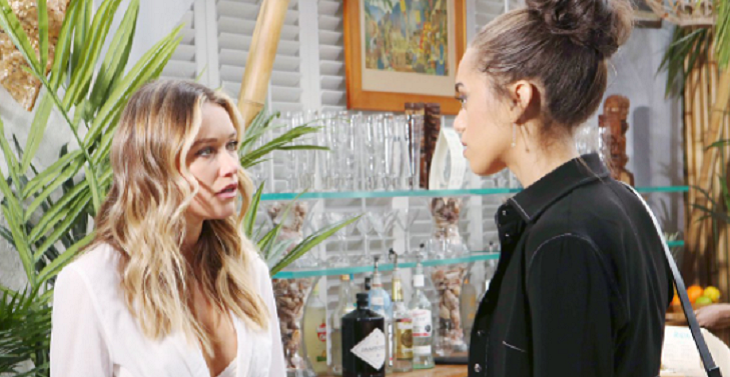 The Bold and the Beautiful (B&B) recap for Tuesday, March 5 finds Zoe desperately wants to tell Hope the truth about Baby Phoebe’s adoption. Elsewhere, Steffy can’t help but think more and more about her good times with Liam while Wyatt tells his brother to not give up hope. Here what you need to know about what is ahead.

It all begins at the Bikini Bar. Flo (Katrina Bowden) can’t help but confront Hope (Annika Noelle) and tell her who she is. Flo reveals that she is Phoebe’s biological mother, much to Hope’s surprise. Hope gushes about the little tot and tells her how happy she is for Steffy to have two beautiful girls at home.

Zoe (Kiara Barnes) then appears and interrupts the two ladies in their conversation. She then lashes out at Flo, and can’t believe that she is continuing to tell everyone her lies. Zoe also said that she is determined to tell Hope the truth because she deserves to know what really happened to her daughter Beth.

Zoe is trying to protect her dad. Would you keep your family safe or reveal the truth? #BoldandBeautiful pic.twitter.com/RxgP7RnnLG

At Steffy’s (Jacqueline MacInnes Wood) house, Ridge (Thorsten Kaye) tells his daughter that he’s happy for her as she holds Baby Phoebe in her arms. He also mentions that he would like to meet the baby’s birth mother and thank her for giving him another beautiful and healthy granddaughter.

B&B spoilers say that Steffy tells him that she will bring the girls to the office so everyone can admire them. The conversation then turns to Liam. After Ridge leaves, Steffy can’t help but think of all the good times she once had with him. She even feels as though she might love him.

Liam And Wyatt Catch Up

At the cabin, Liam (Scott Clifton) shows off a picture of the girls to Wyatt (Darrin Brooks). Liam admits that he would also like to be a father figure to Phoebe. Wyatt comments that he wants to be the fun uncle in the family. Liam then gets serious and tells his brother that he is willing to fight for Hope and their marriage. He doesn’t want to give up.

He then congratulates Wyatt on his new career move. He thinks that working at Spencer Publications will be good for him. Wyatt then tells him to not give up hope and that he’s available if he ever needs to talk. Hope then appears and tells a shocked Liam that he just met Phoebe’s birth mother at the Bikini Bar.

The Bold and the Beautiful Weekly Spoilers: Flo Meets Hope –Sally Makes An Observation– Wyatt Reconnects With An Old Flame