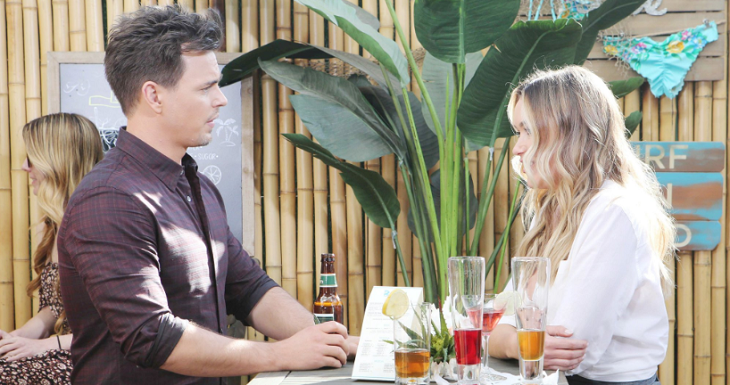 The Bold and the Beautiful (B&B) spoilers for Wednesday, March 6, tease that Wyatt Spencer (Darin Brooks) will be floored to be face-to-face with his high school sweetheart Florence “Flo” Fulton (Katrina Bowden). He and Flo just literally ran into each other at Bikini Bar, and Flo immediately recognized Wyatt.

Wyatt And Flo Catch Up

Flo and Wyatt will take a little time to catch up and to reflect a bit on their past. The two were in love back in high school, but when Quinn Forrester (Rena Sofer) and Wyatt had to abruptly leave town, they didn’t even get a chance to say goodbye to each other. It will certainly be a blast from the past as these old friends reconnect.

Of course, a lot has happened in their lives since Flo and Wyatt knew each other back in the day. Wyatt is now a Spencer, and Flo is now involved in a terrible scam involving both of Wyatt’s ex-wives, Hope Spencer (Annika Noelle) and Steffy Forrester (Jacqueline MacInnes Wood). Imagine how Flo will feel when she learns about Wyatt’s connection to Hope, Steffy, and Liam Spencer (Scott Clifton)!

Panicked at seeing Flo and Hope together, Zoe makes a beeline for the two and interjects just as Flo is about to spill the truth today on #BoldandBeautiful. pic.twitter.com/mvSAFaXp1a

Meanwhile, on the new B&B episode on Wednesday, March 6, Liam will be stunned as he listens to Hope’s story about how she met “Phoebe Forrester’s” (Isabella de Armas and Redford Prindiville) birth mother, Flo. Hope will be shaken as she recounts how Flo approached her and then Zoe Buckingham (Kiara Barnes) came along and formally introduced them.

Hope will go on about how uncomfortable Flo seemed and about how grateful she was to be able to meet Phoebe’s birth mother, but for Liam, some major red flags will go up. He’ll think that it’s just too much of coincidence that Hope just happened to meet the birth mother of the baby that she’s infatuated with. He’ll also wonder about Zoe’s connection to Flo and how that came about.

And Liam will probably be concerned that Phoebe’s birth mother is still around Los Angeles and bumping into people close to Steffy. He may be worried that Flo might have changed her mind about not wanting further contact with Phoebe, and he could fear that she’ll come knocking on Steffy’s door one of these days.

The Bold and the Beautiful Recap For Tuesday, March 5: Zoe Lashes Out At Flo– Steffy’s Still In Love With Liam