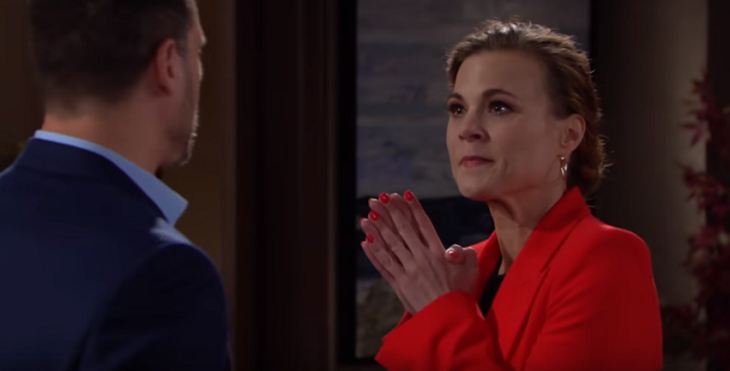 The Young and the Restless (Y&R) spoilers for Wednesday, March 6, tease that Kyle Abbott (Michael Mealor) and Summer Newman (Hunter King) will continue their chat at the GCAC. Summer will be surprised at Kyle’s marriage proposal, and he’ll say let’s do this. But she’ll realize that he’d just see it as a transaction, so she’ll refuse to be Lola Rosales’ (Sasha Calle), donor. Kyle will stop her from leaving, and they’ll argue about Lola being the right woman for him.

Summer will insist that Kyle be honest, and he’ll admit that he couldn’t shut her out of his life completely after she came back from Dubai and that he kissed her back at the cabin. That will make Summer happy, and she’ll decide that she wants to try to make him happy as his wife. She’ll propose that they stay married for a year, and then if they’re not blissfully happy by then, they can get a divorce. Kyle will agree but he’ll refuse to perform husbandly duties.

Could there be wedding bells in #YR’s future? 😱 pic.twitter.com/e6bCruGjzM

Summer will also insist that no one can know that she’s the donor so that they’re seen as two people who just happened to reconnect. Kyle will have a demand of his own…that he is the one to tell Lola. He will want to hurry to arrange for the surgery, but Summer will make him get on bended knee to propose. He’ll oblige and they’ll get a rousing round of applause as Summer accepts his proposal.

In the courtroom, Michael Baldwin (Christian LeBlanc) will call Tessa Porter (Cait Fairbanks) to the stand. He’ll ask if it’s true that she used the incriminating video to extort the defendants. Tessa won’t answer, but Michael will present her with hard evidence of the blackmail and Tessa will admit the truth. Michael will yell that if anyone deserves to face criminal charges, it’s Tessa.

Michael will point out that Tessa didn’t know that the video showed anything nefarious because all it shows is women carrying a rug. He’ll bring up her history of stealing from the Newmans and suggest that Tessa herself killed JT Hellstrom (Thad Luckinbill) or was in cahoots with JT.

Christine will then ask for a recess, during which Michael will tell Nick Newman (Joshua Morrow), Nikki Newman (Melody Thomas Scott), and Victoria Newman (Amelia Heinle) that he created reasonable doubt. And Tessa will tell Mariah Copeland (Camryn Grimes) that she thinks the worst is yet to come.

At Jabot, Phyllis Summers (Gina Tognoni) will chat with Kerry Johnson (Alice Hunter) because she’s the only person Phyllis can count on. She’ll update Kerry on how Christine Williams (Lauralee Bell) twisted her words in court, and how Nick turned against her. Phyllis will insist that she doesn’t want Nikki, Victoria, or Sharon to go to jail.

Kerry will ask if Phyllis has thought about the potential fallout for Jabot if the women are found guilty. Kerry will say that Jack Abbott (Peter Bergman) is concerned about perceptions of Jabot with Phyllis in charge. Phyllis will want to know if Kerry and Jack’s relationship will pose a problem for herself and Kerry.

Christine will then barge into Phyllis’ office, and after Kerry leaves, Phyllis will complain that Christine twisted her words in court, while Christine notes that she outsmarted Phyllis. Then, Christine will ask Phyllis what she knows about Tessa, and Phyllis will be happy to tell Christine everything she wants to know.

Afterwards, Kerry will come back and pledge her loyalty to Phyllis, no matter what her relationship is with Jack. Phyllis will ask her to transform Jabot with a new line of products. Kerry will agree and they agree that this will be the “Phyllis and Kerry” era of Jabot.

Afterward, Nick will Tessa that she got what she deserved, and Tessa will remark that she didn’t want to say anything and that she wasn’t the one who told Christine about the break-in or the kidnapping.

Back inside the courtroom, Michael will blast Nikki and Victoria for not telling him everything about Tessa. Michael will say that they sabotaged themselves. Brittany Hodges (Lauren Woodland) will overhear their conversation and will say that she’s calling Rey.

Rosales (Jordi Vilasuso) to the stand, and that after that, everyone will forget about Tessa’s testimony.