Days of Our Lives Spoilers For Thursday, March 7: John’s Shocking News– Marlena’s Future In Danger–Diana Plots Her Next Move 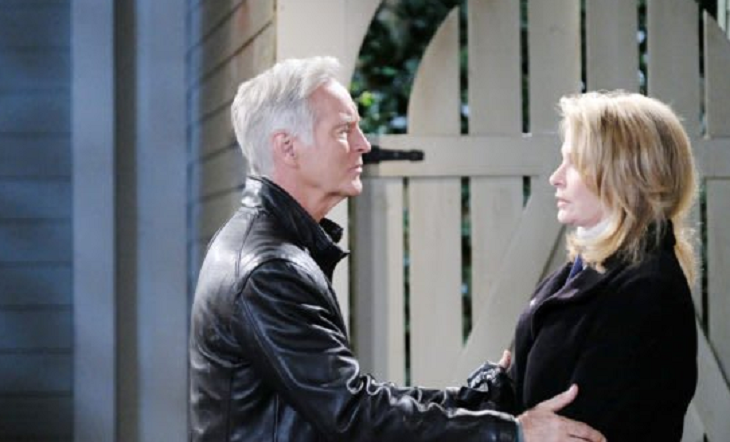 Days of Our Lives (DOOL) spoilers for Thursday, March 7 reveal that John will be left stunned, especially when he finds out about a sinister plot that Kristen had against Marlena. Meanwhile, Diana is still working on plans of her own. Here’s what you need to know about what’s ahead on DAYS.

John is left shocked when a nurse tells him that it was Kristen DiMera who tried to kill Marlena. There’s also a strong possibility that Kristen might be lurking in the showers. It was previously believed that Kristen died in the same fire that killed Nicole, but that might not have been the case.

Days of Our Lives spoilers tease that the truth will soon come out about Kristen’s supposed death. Not only is John stunned over this new allegation, but he’s determined to find out how this nurse knew about the attack. This will also give John more of a reason to protect Marlena.

Diana Plans Her Next Move

Elsewhere, Diana Cooper is plotting her own scheme to get rid of Marlena. It’s without a doubt that she is doing this because she wants John for herself. She’s already caused Marlena to question John’s past and whether or not he is Leo’s biological father. Diana, meanwhile, is on a mission to claim what she believes is hers.

For John, has two huge matters on his hands. Not only does he want to investigate who was the person behind the first attack, but also wants to make sure that nothing else happens to the love of his life. Of course, fans will have to tune in to find out what will happen next!

Days of Our Lives airs weekdays on the NBC network. Check your local listings for times. In the meantime, drop us a line with your thoughts in our comments section below.