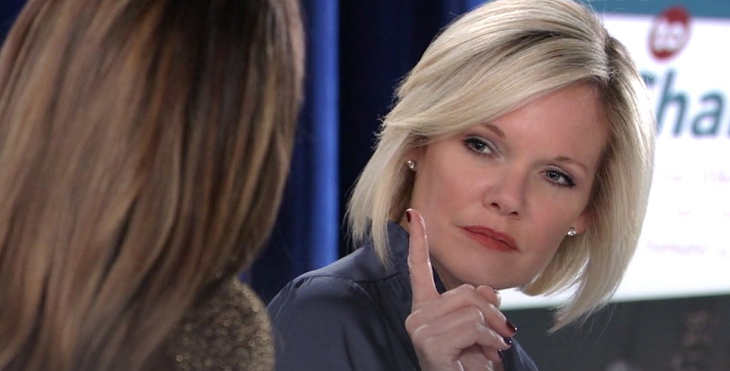 General Hospital (GH) spoilers tease another day of exciting drama on Thursday, March 7 as Ryan Chamberlain’s (Jon Lindstrom) crime spree starts drawing to an end, and Sonny Corinthos (Maurice Benard) still looks for his son Dante Falconeri (Dominic Zamprogna) in Turkey. Here’s what you need to know about what’s ahead on GH.

First, we see Sonny, asking someone who is probably the person Robert Scorpio (Tristan Rogers) arranged for them to meet, “What else did you see?”

Meanwhile, back in Niagara Falls, a worried Josslyn Jacks (Eden McCoy) has arrived at the hospital in Niagara Falls where paramedics rushed Oscar Nero (Garren Lake Stitt) after he suffered a seizure and became unconscious.

She’s shown begging a nurse to let her see Oscar. She had called his mother, Dr. Kim Nero (Tamara Braun) to let her know what was going on.

Chase Puts An APB on Ryan

At General Hospital, Kim tells Drew Cain (Billy Miller) what’s going on with Oscar and that the kids are in Niagara Falls! In another part of General Hospital, Lulu Falconeri (Emme Rylan) gets off an elevator and walks towards Detective Harrison Chase (Josh Swickard) as he’s calling in the APB (All Points Bulletin) about Ryan Chamberlain, saying he’s to be considered armed and extremely dangerous!

Elizabeth Webber Baldwin (Rebecca Herbst) is calling someone on the phone, telling them she has to tell them something about Franco (Roger Howarth); perhaps it’s her friend Dr. Terry Randolph (Cassandra James) or her son Cameron (William Lipton), who she obviously doesn’t know is in Niagara Falls?

Maybe she called the person he’s supposed to be staying overnight with and the person doesn’t know where he is!

Meanwhile, back to Niagara Falls: Ava Jerome (Maura West) opens the car trunk looking for her shoes (probably special wedding shoes) and with a shocked look on her face, exclaims, “What is happening?”

Undoubtedly, she can’t find her shoes, but she found a bound and gagged Carly Corinthos (Laura Wright) with a head wound!

Laura Webber Collins (Genie Francis) is in a car with Jason Morgan (Steve Burton); and sees something that causes her to exclaim, “Oh my God!”

Then we see Ryan telling Cameron, who had literally run into him on the way out of the hotel, “I can’t let you go now…not yet!”