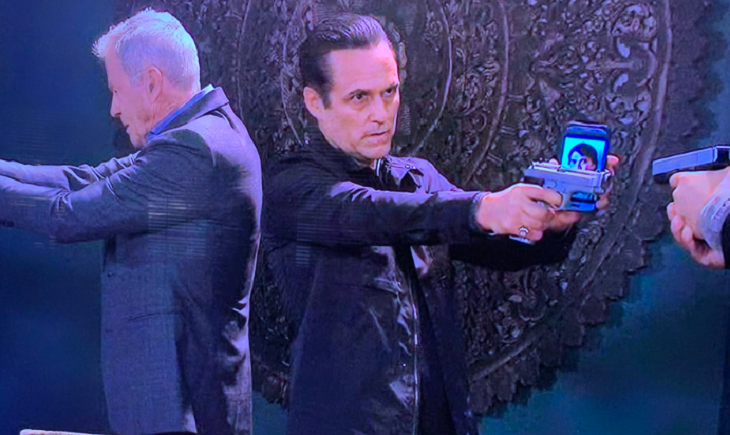 General Hospital (GH) spoilers tease that Sonny Corinthos (Maurice Benard) will have to rethink his strategy to rescue his son Dante Falconeri (Dominic Zamprogna) by the end of the week.

On Monday’s show, Robert Scorpio (Tristan Rogers) intervened when Sonny was getting ready to be taken away at gunpoint by a bunch of nasty individuals whose gambling session he’d honed in on after they thought he may be a cop or with the WSB. They did tell the two that Dante had been there asking questions after one of them was shot in self-defense.

Scorpio was going to put Sonny in touch with a liason who may have more information on Dante’s current location. However, Sonny will have to retreat and take a step back; could this be because the thugs who actually may have Dante have attacked Sonny, or delivered ominous threats of killing Dante if he doesn’t back off?

Dante Has Been Kidnapped?

Other General Hospital spoilers tease that Dante is being held captive or perhaps even in a Turkish prison and that’s why he has been unable to contact Lulu Falconeri (Emme Rylan) or anyone else in his family. He did make a call letting her know he wouldn’t be able to contact her because he was going in deep cover, but could that have been made after his capture, and the captors may have allowed him to make that one call primarily to throw suspicion off of themselves?

Dante’s phone has not been able to be traced since that time by the WSB, and Robert Scorpio (Tristan Rogers) had originally assumed (or been told by higher-ups) that Dante had gone rogue and off the grid. If Dante’s phone has been taken and destroyed, that would end the WSB’s efforts to even track him!

Stay tuned to GH and keep checking General Hospital spoilers frequently to see what happens next in the search and rescue mission mounted by Sonny for Dante!