The Bold and the Beautiful Spoilers: Thursday, March 7 – Flo Sweats At The Dinner Party With Hope & Liam – Zoe & Xander Celebrate Their Love 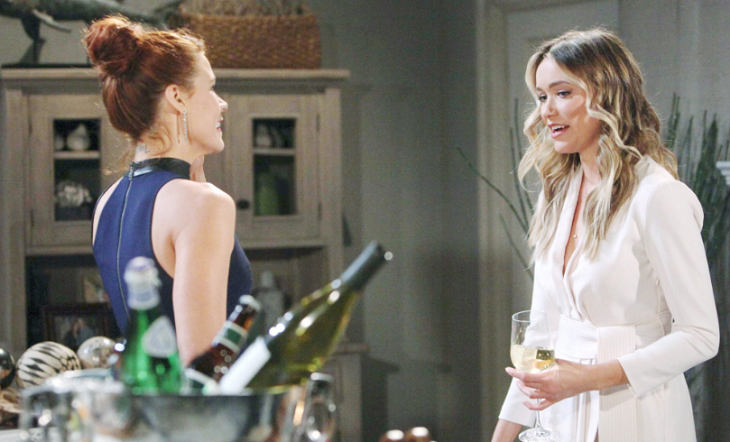 The Bold and the Beautiful (B&B) spoilers for Thursday, March 7, tease that Florence “Flo” Fulton (Katrina Bowden) will have a tense evening. She reluctantly agreed to attend a dinner party at Wyatt Spencer’s (Darin Brooks) place, thinking that it might be a bit awkward to meet Wyatt’s girlfriend Sally Spectra (Courtney Hope). But little does she know that she’ll encounter Hope Spencer (Annika Noelle) once again. Here’s what you need to know about what’s ahead on B&B.

Flo Has Dinner With Wyatt And Sally…And Hope

Flo’s last encounter with Hope at Bikini Bar was unexpected and awkward. She nearly told Hope the truth that Phoebe Forrester (Isabella de Armas and Redford Prindiville) is actually Beth, but Zoe Buckingham (Kiara Barnes) stopped her at the last second. Hope will be floored to see Hope again at Wyatt’s place, and her guilt and angst will set in again.

But Hope will probably be pleasantly surprised to see Flo again, whom she believes is Phoebe’s birth mom. Hope feels a connection to Flo, and she’ll be happy to introduce her to Liam Spencer (Scott Clifton). Wyatt will probably be shocked to discover that his ex turned out to be Phoebe’s birth mom, and it seems that everyone at the dinner party will feel a bit uncomfortable about the whole thing.

Here’s a sneak peek at tomorrow’s dinner party. Do you think there are still feelings between Wyatt and Flo? #BoldandBeautiful pic.twitter.com/JLhMBvDb00

But no one will feel more uncomfortable than Flo, whose feelings of guilt will become overwhelming as the evening progresses. She’ll be face to face with the couple who lost their baby girl thanks to Reese Buckingham’s (Wayne Brady) lies and her own actions, and it will become absolutely unbearable for her.

Meanwhile, on the new B&B episode on Thursday, March 7, Zoe’s big evening plans for herself and Xander Avant (Adain Bradley) will get underway. Zoe’s planned a nice, romantic evening for the two of them, as she really needs to take her mind off of everything her dad and Flo did.

So that happened… #BoldandBeautiful pic.twitter.com/Rol7GFrPyZ

Passion will erupt and Zoe and Xander will spend the evening enjoying each other’s company. They’ll talk about how far they have come, and about how great their relationship is right now. They’ll think that they make a pretty good team and remark that they’re better together than apart.