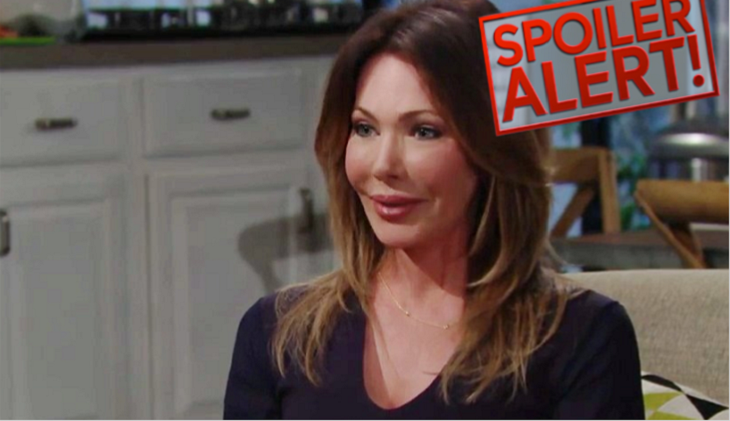 The Bold and the Beautiful (B&B) recap for Thursday, March 8 finds that Wyatt learns the truth about his old high school sweetheart, Flo. Sally is suspicious of Wyatt’s connection with Flo while Taylor is looking forward to the future. Here’s what you need to know about this B&B episode.

Wyatt (Darrin Brooks) apologizes to Sally (Courtney Hope) for adding another guest to their impromptu dinner party. It’s his old high school sweetheart, Flo. When Flo (Katrina Bowden) arrives, Wyatt tells her that she looks beautiful and is happy to see her living and thriving in Los Angeles.

When Sally comes back, Wyatt introduces the two ladies to each other. Sally wants to know more about what kind of person Wyatt was back in high school and Flo tells her about his style and quirks. Hope (Annika Noelle) and Liam (Scott Clifton) then arrive. Flo is surprised to find out that Hope is married to Wyatt’s brother.

Hope then makes things a little uncomfortable by bringing up Baby Phoebe. Wyatt then takes Liam aside and tells him he had no idea that Flo was Phoebe’s biological mother. The conversation then leads to Baby Beth.

The Bold and the Beautiful spoilers state that Hope tells Flo her story and how she still wishes that she was awake the moment Beth died. Flo can’t help but feel emotional. Hope senses that Flo has something to share and gently presses her to let it all out. With tears in her eyes, Flo tells her that she has something important to say.

Taylor Presses For A Steam Reunion

At Steffy’s (Jacqueline MacInnes Wood) house, her mother Taylor (Hunter Tylo) stops by to see the girls. She’s excited about her new practice and Steffy tells her that she’s proud of all that she’s accomplished so far. Taylor also says that she’s happy that Steffy is living her new life with her two daughters. She’s also relieved that Flo is now part of the past.

Steffy then points out that she feels like she is Phoebe’s true mother. She has actually spent more time with her than her supposed biological mom, Flo.

At Zoe’s (Kiara Barnes) apartment, she and Xander (Adain Bradley) canoodle as he tries to take her mind off of her stress. He then asks about Reese. Zoe says that she hasn’t heard from her father in a long time. What’s more, she doesn’t want to hear from him, either. Zoe then changes the conversation and tells Xander that she trusts him. She also hopes to have a future with him. The two begin to kiss and make out.

The Bold and the Beautiful Spoilers: Hope Is Losing Herself– Can Liam Save Their Marriage?