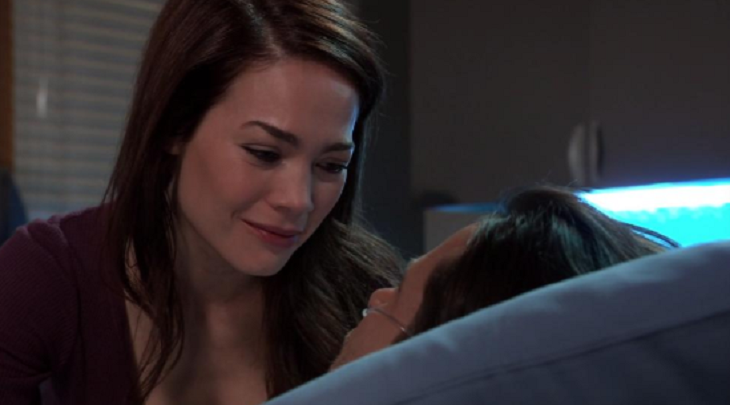 General Hospital (GH) spoilers tease that Monday, March 11 will again be another exciting episode as some storylines wind down and others accelerate! First, it’s Auntie Stella (Vernee Watson) offering to come to the rescue of Jordan Ashford (Briana Nicole Henry) by asking her if she’d mind her being a donor. She asks her how she would feel about having a little bit of Auntie Stella in her!

Friz On The Rocks

Meanwhile, over with Franco Baldwin (Roger Howarth) in another room at General Hospital, he looks up wistfully at a somewhat angry looking Elizabeth Webber Baldwin (Rebecca Herbst) and asks her, “How soon do you tell me that’s enough?”

Could it be that in spite of all the mitigating circumstances, Liz still can’t get past Franco not letting her in on the loop about Jordan’s plan to smoke out the serial killer?

Over at the Davis house, Dr. Hamilton Finn (Michael Easton) sits with Alexis Davis (Nancy Lee Grahn), who is asking her about a large bottle of vodka in a brown paper bag and asks, “What are you running from? Why do you have this bottle?”

WATCH: Are Julian and Alexis truly one another's endgame, like he claims (before things heat up)? @NancyLeeGrahn @WilliamdeVry1 #GH55 pic.twitter.com/v9ZZNHxpdX

On Friday, March 8, we saw Alexis awaken from an intense dream about Julian, that they reunited and passion erupted; General Hospital viewers saw her with the bottle in the bag at the end of the scene, obviously considering whether she should take a drink or not. Did she call Finn for some Alcoholics Anonymous support?

In Turkey, Sonny Corinthos (Maurice Benard) talks to Robert Scorpio (Tristan Rogers), telling him he wants to meet this Raj (Noshir Dalal) face to face (probably to kill him)!

In Friday’s episode, he’d been led to believe by WSB agent Vick (uncredited actress) that Raj had gotten to Dante before Dante got to him and that Dante was probably dead.

Carly won't survive out in the cold much longer. Can Laura and Jason find her before it's too late? A thrilling, new #GH starts RIGHT NOW on ABC! #GH55 pic.twitter.com/Dxo00KMsir

In Niagara Falls, Jason Morgan (Steve Burton) reaches over the footbridge like he’s trying to help someone up as Laura Collins (Genie Francis) screams, “Oh my God! Jason!” Is it Ava Jerome (Maura West) who’s kicked Ryan Chamberlain (Jon Lindstrom) loose as he pulled her over the bridge with him in an attempted murder-suicide?

Meanwhile, Carly Corinthos (Laura Wright) again lies unconscious in the snow at the bottom of a culvert, after having tried obviously unsuccessfully to rock climb it in high heels! Will Jason reach her in time to save her, and what about her unborn baby?