Bold and the Beautiful Recap Monday, March 11: Zoe And Reese Try To Stop Flo From Confessing 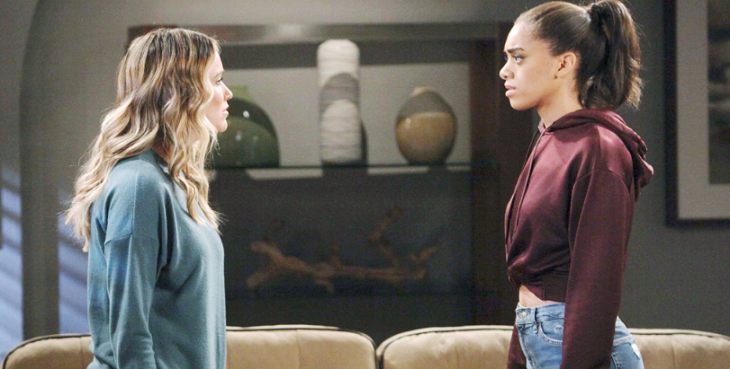 Over at the beach house, Sally pokes fun at Wyatt and tells him that she wants to see all of his old high school pictures, including his infamous mohawk. She also wants to learn more about his relationship with Flo. Wyatt explains that Flo seems very different from the girl he used to know back in high school. Sally can’t help but notice that both Hope Logan (Annika Noelle) and Flo were pregnant at the exact same time, yet neither one of them went home from the hospital with a baby.

Zoe is trying to protect her dad. Would you keep your family safe or reveal the truth? #BoldandBeautiful pic.twitter.com/RxgP7RnnLG

At the cabin, Hope tells Liam Spencer (Scott Clifton) that she feels better now that she’s spent some time with their friends at the dinner party. They also both can’t believe that Wyatt’s ex-girlfriend in Baby Phoebe’s birth mother. They both also talk about Flo and how they think she seems like a very nice person. Hope also mentions that she thinks Flo is in just as much pain as she is over losing her baby. Liam also points out that Hope and Flo looked like they were bonding well.

Elsewhere, Zoe stops by Flo’s apartment and begins lashing out at her for still being in Los Angeles. She can’t help but wonder if Flo is stalking Hope. Flo tells Zoe that she was invited to Wyatt’s dinner party. Reese shows up unexpectedly. He tells his daughter that he needs to man up and face the consequences of his actions. Zoe then points out that there’s a strong possibility that everyone will end up behind bars if she gets too close to Hope and Liam. Flo has a plan, though.

The Bold and the Beautiful Spoilers Tuesday, March 12: Reese Gets Real With Flo And Zoe – Wyatt’s Committed To Sally

She thinks it’s time for her to tell Hope the truth. She tells Zoe that the earlier they do it, the better. That way they can do more damage control. Zoe argues and tells Flo that it’s a ridiculous idea. Flo tells both Zoe and Reese that she can’t hide this secret any longer. She doesn’t care what they do and proclaims that nothing is going to stop her from confessing the truth to Hope.