Days Of Our Lives Spoilers: Will And Sonny Celebrate– Did John Find Dirt On Leo? 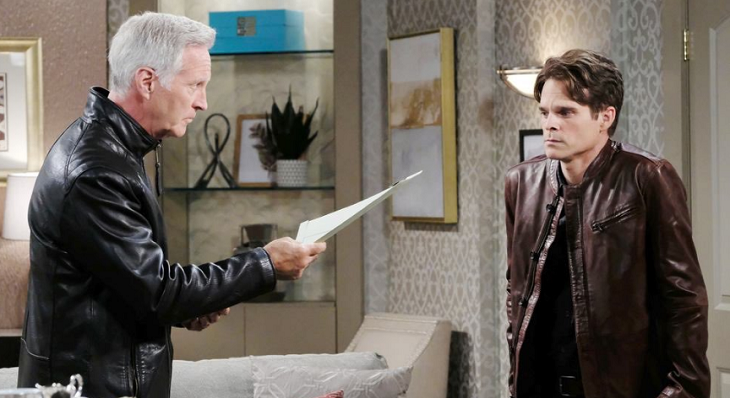 Days of Our Lives (DOOL)  spoilers tease that this week, Sonny Kiriakis (Freddie Smith) and Will Horton (Chandler Massey) will have something to celebrate about! Will John Black (Drake Hogestyn) find something in Diana Colville Cooper’s (Judith Chapman) safe that he can leverage Leo Starke (Greg Rikaart) with?

Friday, March 8 left viewers with John cracking Diana’s safe and taking out a document in an envelope; but little did he know that Leo was at the hotel room door ready to come in trying to retrieve the same thing!

On Monday, March 11, Leo will catch John in the act; however, it all works out well for everyone! The document is Diana’s proof that Leo murdered his father, Richard Cooper. That’s definitely something John could leverage (or blackmail) Leo with, but then, on the other hand, it’s a standoff with Leo catching John breaking and entering the room and cracking the safe, which he could blackmail John with!

In the latest #DAYS, Diana is plotting to get her way. https://t.co/ZsCmioRrzb pic.twitter.com/yegUb9OfSb

John gets through to Leo and breaks down his defenses, by talking to him as a good father would to a son, which is something Leo has never had in his life. DAYS spoilers say that Leo realizes he’s lost his ace in the hole if John turns the incriminating document into the police which would cause Leo to be charged with worse than he got Will and Sonny charged with, and then, as icing on the cake, so to speak, John tells him that he’s Leo’s birth father!

This will throw Leo for a loop and he’s blindsided by this information, which John undoubtedly will assure him DNA tests have been done to prove the claims. John is able to convince Leo to drop the charges against Will and Sonny at that point, so at least for the time being, John, Leo, Will, and Sonny are all happy!

Stay tuned to Days of our Lives and keep checking Days of Our Lives spoilers frequently to see the latest news and updates!