The Bold and the Beautiful Spoilers Tuesday, March 12: Reese Gets Real With Flo And Zoe – Wyatt’s Committed To Sally 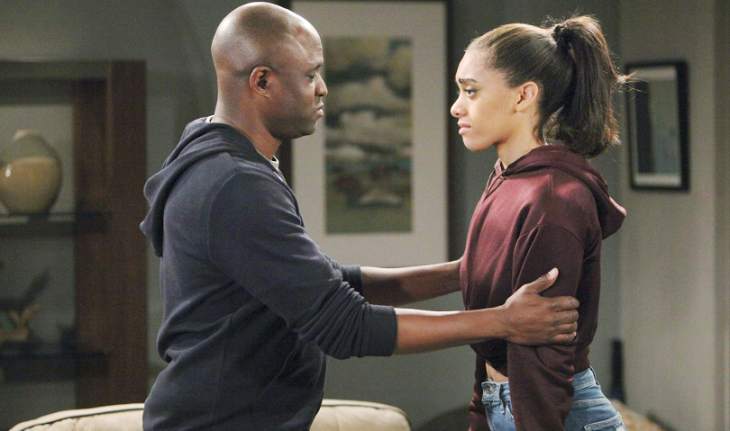 The Bold and the Beautiful (B&B) spoilers for Tuesday, March 12, tease that Florence “Flo” Fulton (Katrina Bowden) and Zoe Buckingham (Kiara Barnes) will get an earful from Reese Buckingham (Wayne Brady). He’s just walked in on Zoe and Flo right after they’ve decided to tell Hope Spencer (Annika Noelle) that her baby is alive. Reese is stunned that the two have decided to turn on him and, in all likelihood, send him to prison.

Flo is especially upset by the whole situation. She feels a tremendous amount of guilt her role in the adoption of Phoebe Forrester (Isabella de Armas and Redford Prindiville) to Steffy Forrester (Jacqueline MacInnes Wood). She’s miserable and thinks that the only way to get relief is by coming clean to Hope and ultimately reuniting Hope with her baby.

Zoe confronts Flo for going to dinner at Wyatt's and flips when she finds out about their connection. WATCH FULL EPISODE: https://t.co/tfpfqW2N4f #BoldandBeautiful pic.twitter.com/dPq4njpyL3

But Reese will likely point out that Flo is guilty of several crimes, and she’s not going to get off with just a slap on the wrist if the truth comes out. She’ll be facing serious charges and could very well be sentenced to prison. As for Zoe, https to keep her job at Forrester. Zoe’s “fresh start” in Los Angeles and her new modeling career are very important to her, and that will all be down the drain if the truth comes out.

Reese might even resort to threats, especially where Flo is concerned. He could easily tell the cops that Flo was in on the baby swap scam from the start and really jam Flo up if he wanted to. He might threaten to do so if Flo tells the truth.

At any rate, it doesn’t look like the secret is going to come out for a while yet, so Reese will find something to do or say that will keep Zoe and Flo mum for now. But he’d better stay in Los Angeles for a while to keep the two women reigned in, as it looks like either of them could crack at any moment.

Meanwhile, on the new B&B episode on Tuesday, March 12, Wyatt Spencer (Darin Brooks) and Sally Spectra (Courtney Hope) will discuss their future. They’ve just had quite the dinner party, with Flo being revealed as Phoebe’s birth mother. They’ll relax and consider what their future will look like together.

It looks like Wally will be feeling pretty sentimental, and Wyatt will want Sally to know just how committed he is to her on Tuesday’s episode. He’ll tell her how much she means to him, and he’ll promise to always be there for her, both personally and professionally in their new venture at Spencer Publications.

The Bold and the Beautiful Spoilers: Hope Reacts To Steffy’s Exit – Has Meltdown Over No More Phoebe Time—Lope In trouble

Wyatt and Sally appear to have a solid relationship. Sally wasn’t at all jealous about Flo coming back into Wyatt’s life, and that bodes well for the couple. And soon, they’ll be tested again when Thomas Forrester (Matthew Atkinson) returns to Los Angeles and comes face-to-face with Sally once again. Will Wyatt be as understanding about Thomas as Sally was about Flo?