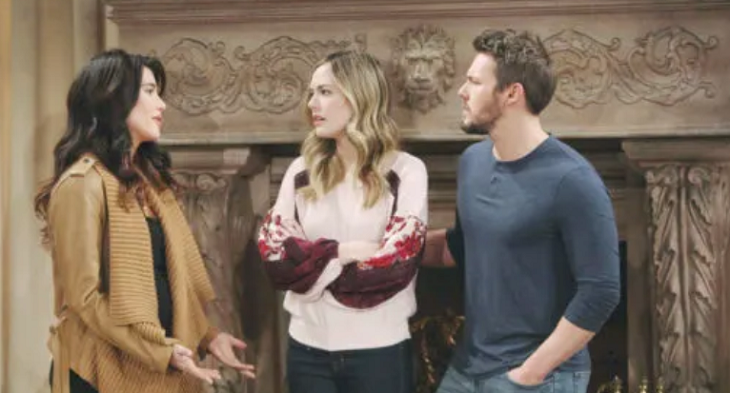 Bold and the Beautiful spoilers for Wednesday, March 13, tease that Hope Spencer (Annika Noelle) and Liam Spencer (Scott Clifton) will be in for a huge shock. They’ll listen in disbelief as Steffy Forrester (Jacqueline MacInnes Wood) announces that she’s taking Kelly Spencer (Chloe Teperman and Zoe Pennington) and Phoebe Forrester (Isabella de Armas and Redford Prindiville) to Paris for a while.

Steffy’s reason for leaving will be straightforward. She’ll want to remove herself and the girls from Liam and Hope’s world for a little while. She won’t plan on being gone for too long, but she does want to give Hope and Liam a chance to work through their grief over losing Beth Spencer and to work on their marriage in the absence of any distractions.

Hope has been having a terrible time lately dealing with her grief over Beth, and she’s gone to some extremes. First, she started acting very strangely around Phoebe, and Steffy worried that she was getting too attached to the little girl. Then, Hope got it in her head that Steffy and Liam should reunite, and she started pushing “Steam” back together. It has all been a bit much for Steffy.

The Bold And The Beautiful Spoilers: Bill Feels Guilty About Pushing Thomas And Caroline Together

So she will take the girls to Paris and live and work from there for a while. Steffy will be able to fulfill her co-CEO duties from the Paris office, and she’ll get some much-needed space from Hope and Liam. It may be difficult for Liam and Hope at first, but ultimately it may do their marriage some good.

Meanwhile, Wyatt Spencer (Darin Brooks) and Sally Spectra (Courtney Hope) will be on the receiving end of a big request. Donna Logan (Jennifer Gareis) and Justin Barber (Aaron D. Spears) will ask for their collaboration in a matchmaking scheme.

Justin and Donna are trying to bring Bill Spencer (Don Diamont) and Katie Logan (Heather Tom) back together again, but they need some help. They’ll ask Wyatt and Sally to help them in their endeavor. This might be a bit awkward at first, since Wyatt was once paired with Katie himself, but since he’s now happily with Sally, he’ll ultimately agree to the plan.

It looks like the first item on the agenda for this new group of matchmakers will be to arrange a surprise lunch date for Katie and Bill, as the two will be dining at Il Giardino later this week.

Bold And The Beautiful Spoilers: Hope Bonds With Thomas, Turns Her Attention To Douglas https://t.co/Efb3vD60RP pic.twitter.com/bUJDgV33Na

But B&B spoilers say that “Batie” will soon realize that they’re being set up and that someone’s playing cupid behind the scenes. It doesn’t look like that will matter too much, though, as Bill and Katie seem to be genuinely interested in each other once again.

The Bold And The Beautiful’ Spoilers: Ridge Close To The Truth – Steffy…