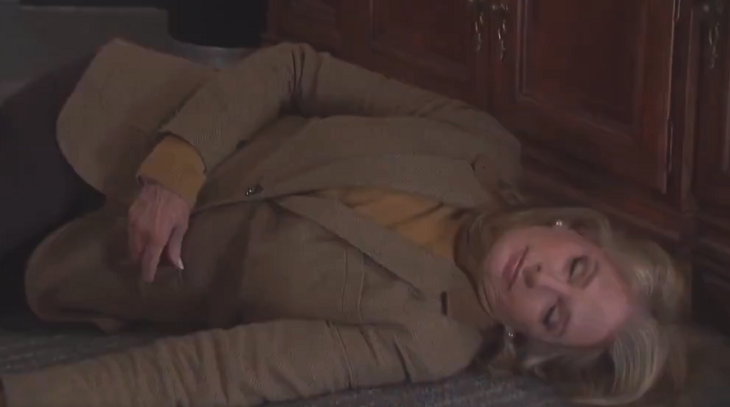 It all begins when John finds the love of his life, Marlena, lying stone cold on the floor. Little does he know that it’s Diana Cooper (Judith Chapman) who is trying to get rid of her so she can be the only woman in his arms again.

Looking for a way to erase her from the picture, Diana poisoned Marlena with some treats, but passed them of as a gift from Haley Chen (Thia Megia). Marlena collapsed after taking a bite of the treat.

Days Of Our Lives Spoilers – Marlena Sees A Familiar Face

Unfortunately, things aren’t looking very good for Marlena. John has every reason to be worried. She will see a familiar face visit her in ghost-form after she blacks out. It will be Tony DiMera, who will tell her that she died and that her soul has left her body. It will now be a race against time to save Marlena before it’s too late.

Days Of Our Lives Spoilers: JJ Hires Justin — Can He Help With Haley’s Immigration Problem?

Elsewhere, Sonny Kiriakis (Freddie Smith) and Will Horton (Chandler Massey) receive some good news. It’s taken a long time, but Leo Stark (Greg Rikaart) has finally dropped charges against him. Needless to say, that doesn’t mean that Leo might pull some tricks up his sleeve later on.

Days Of Our Lives Spoilers – Brady Warns Rex About Eric

For now, it seems as though John has managed to change Leo’s mind. That’s because he found some incriminating evidence that might put Leo behind bars as well. Of course, this will shock both Sonny and Will, as they didn’t expect Leo to make a move like this. But then again, they don’t know the reason behind it, either.

Days Of Our Lives #DOOL Spoilers: Is Stefan Replacing Charlotte With Holly As He And Chloe Grow Closer? @celebratesoaps https://t.co/ncZKBccWCV

Also, Brady will warn Rex about their brother, Eric. He will tell him the story of how Eric managed to swipe Nicole Walker away from him while they were still romantically involved. Simply put, Eric is a man that can’t be trusted.

Days of our Lives airs on the NBC network. Don’t forget to come back to Soap Opera Spy for all the latest news, updates and spoilers on Days of Our Lives and your favorite daytime television shows right here!