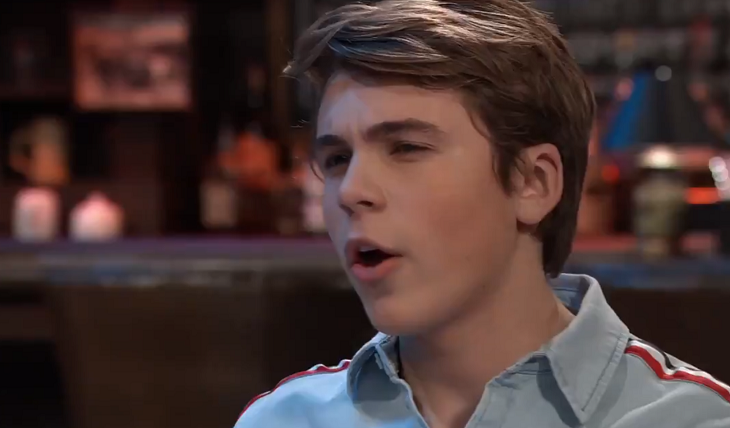 General Hospital (GH) spoilers tease that Cameron Webber (William Lipton) has a lot of ‘splainin’ to do to his mom, and also to Franco Baldwin (Roger Howarth) once he gets home from Niagara Falls. But his focus will still be more his mom than it will be Franco, more likely than not.

Since Drew Cain (Billy Miller) was helping Liz (Rebecca Herbst) with the boys and advocating for Franco, he should apologize to him and also to Kim Nero (Tamara Braun) for driving Oscar Nero’s (Garren Lake Stitt) car and damaging it since it was a gift from Drew for Oscar’s birthday. No one could have predicted that Oscar would get worse so soon and have the seizure, so that will probably not be addressed any further than it already has been.

However, he was very snarky and disrespectful to his mother concerning Franco. Drew called him on that at least once already, but that’s another apology that should go to Drew as well. His attitude concerning Franco was more understandable, given the circumstances than his sneaking off to Niagara Falls and lying about where he was, although the other three did as well!

That was very out of character for Oscar particularly, and he was encouraged to do so by the other three, and they all did the same thing. They sent texts that said they were spending that night studying, etc with either each other, in Joss (Eden McCoy) and Trina’s (Sydney Mikayla) case, or with others.

Cameron will explain to Liz that he did not know Franco’s guilty plea and interview with Lulu Falconeri (Emme Rylan) were part of a secret plan he was involved in with Jordan Ashford (Briana Nicole Henry). He also felt Liz was not seeing the forest for the trees with Franco, and that he had to step up and be the man in the house and protect his brothers.

He sincerely believed Liz had become delusional and didn’t want to face what he assumed was the truth about Franco, that he was still a killer and that the brain tumor had only been an excuse to hide behind! In other words, he pretty much believed Franco’s interview over his mother.

Cam will still be in plenty of trouble for the lies and the trip itself. He may lose his probation for not making it to community service in time. But perhaps the mitigating circumstances of Oscar’s seizure and the breakdown of the car will help.

Or perhaps Drew and Kim will fly him home in the helicopter along with Oscar if he’s okay to fly. But how will Joss and Trina get home? There’s not that much room in a helicopter! Stay tuned to GH for the answers to these and other questions, and keep checking General Hospital spoilers frequently for all the latest news and updates!