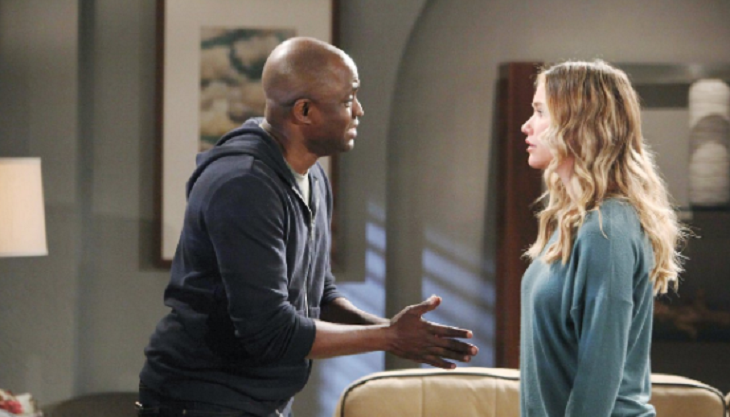 The Bold and the Beautiful (B&B) recap for Tuesday, March 12 finds Reese Buckingham (Wayne Brady) is back in town just in time for him to do some much-needed damage control. Hope Logan (Annika Noelle)and Liam Spencer (Scott Clifton) go over what they know about Flo (Katrina Bowden) while Flo refuses to leave town.

Over at Reese’s apartment, Flo threatens to tell Hope all about Reese’s shadiness and how he pretended that Baby Beth had died, just to hand over the tot to Steffy Forrester (Jacqueline MacInnes Wood) for adoption. Flo throws it in his face that he stole a baby in order to pay off his debts. Flo admits that she is guilt-ridden and wishes that she never played a part in this whole plan, to begin with.

Reese insists that he did this in order to protect his daughter Zoe Buckingham (Kiara Barnes), who has been reduced to tears. Flo argues that Hope might never recover from this and that he’s a selfish person who is only looking out for himself. Reese has another plan though. He wants Flo to move back home to Las Vegas. He also wants Zoe to try and convince Hope to have another child.

Back at the cabin, Hope and Liam go over what they know about Flo. Liam mentions that Sally Spectra (Courtney Hope) didn’t look very jealous about Flo, even though she is Wyatt’s ex-girlfriend. Hope says that she wants to get to know Flo better and mentions once again that she still misses Baby Beth. Liam hints that they should try for another child as he knows that she’s destined to become a mother again one day. Hope ponders how life would be if Baby Beth were still alive.

Wyatt assures Sally about his love for her and his commitment to reviving "Spectra" fashions. WATCH FULL EPISODE: https://t.co/SivgX7MKIF #BoldandBeautiful pic.twitter.com/RuRJLMkXP6

Sally And Wyatt Plan Their Future

At their beach house, Sally and Wyatt Spencer (Darin Brooks) are once again canoodling in bed. Sally reaches over for Wyatt after he receives a text message. She reads it out loud. It’s Flo. She thanks him for inviting her over to his dinner party. Meanwhile, Wyatt mentions that he hasn’t heard from his father Bill Spencer (Don Diamont) in a long time.

Sally wonders if they might have made a mistake in agreeing to work for him at Spencer Publication. Talk then turns to the future of their relationship. Wyatt is convinced that they will be together for a very long time. Sally pokes fun at Wyatt for a while but then admits that she almost gave up on men until she met him.