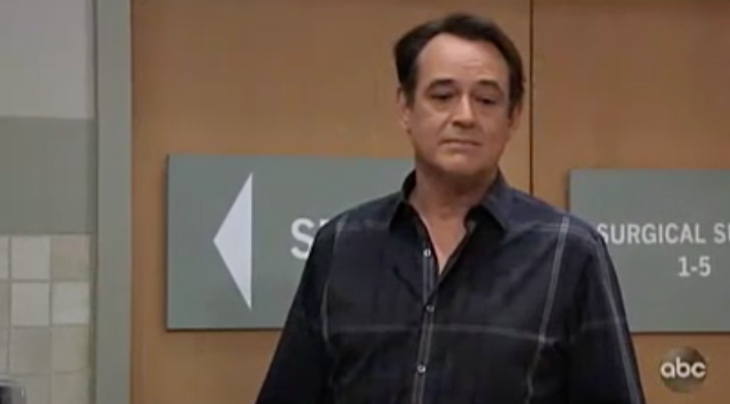 Welcome to your Thursday, March 14 General Hospital recap! We begin our day with Ava (Maura West) running up to Kevin (Jon Lindstrom) and slapping him, “You killed my daughter!” Anna is at the Metro court getting a drink when Andre appears, they embrace.

Willow shows up at Chase’s apartment and they kiss. They then decide to take a walk in the park where they get caught in the rain. Back at the apartment, they are soaking wet and (of course) Chase strips his shirt off. Willow emerges in just a t-shirt and Chase puts her dress in the dryer. Chase gives her a glass of wine as they discuss spending more time together, they kiss.

Alexis runs into Laura on her way out of the hospital and says they need to discuss the divorce filings. Lulu is curious why she’s in no rush to figure this all out. Alexis leaves and Laura explains to Lulu that Kevin survived the explosion years ago and went to work with the DBX. Laura is upset that Kevin never told her that Ryan was alive and could potentially escape someday. Laura runs into Kevin and she doesn’t think he should come home with her.

Alexis Spends Time With Her Girls

Alexis runs into Finn on her way to Charlie’s, he says it’s a bad idea for her to be around Julian. At the pub – Sam (Kelly Monaco), Kristina (Lexi Ainsworth), and Molly (Haley Pullos) discuss Dawn of Day while waiting for Alexis. Valerie (Brytni Sarpy) shows up and apologizes to Kristina for their earlier Dawn of Day disagreement. Kristina accuses Valerie of not being true to herself and she’s not sure she can be her friend. They argue and Kristina says that Valerie is insecure and negative energy. Valerie storms off and Kristina explains to her sisters that she does not have to agree with everyone. Alexis shows up and explains the crazy Ryan / Kevin story.

Sam shows up at Dawn of Day and no one seems to be there. Her phone beeps and Shiloh appears with his shirt off (of course).

Anna And Andre Catch Up

Andre (Anthony Montgomery) and Anna (Finola Hughes) discuss Jordan’s dire prognosis. Anna says how happy she is to see him but has questions regarding the twin mind mapping experiment. Andre says he did not know Anna was one of the patients in the twin study. She’s wondering if any of Alex’s memories were transferred to her. Finn (Michael Easton) shows up and they begin to exchange medical information about the memory transfers. Anna is upset and wants to know if she has Alex’s memories or her own.

Shiloh thinks he can help Oscar feel better and inquires what he can do to help. Kim is not buying what he is saying and dismisses his “spiritual healing.” Shiloh leaves and Kim is not convinced he’s a good person.

At the hospital, Ava (Maura West) grabs Kevin (Jon Lindstrom) and starts attacking him, Scotty (Kin Shriner) shows up and drags her off him. He explains that its Kevin, not Ryan. Kevin says he understands what happened to her and he apologizes for her pain. Ava walks away and sees a poster of Kevin on the wall that she rips down, Scotty grabs her as she collapses in tears.

Shiloh's hold over the people of Port Charles is growing. But will his past threaten Dawn of Day's future? #GH is brand-new and STARTS NOW on ABC! #GH55 pic.twitter.com/cn1Q91UIyU

Willow Is A Member Of DoD?

Valerie is at Metro Court as she thinks back to kissing Kristina, she orders a very strong drink. Molly tells Kristina that Dawn of Day is a cult and she’s been indoctrinated. At the DOD house, Sam asks Shiloh to put his shirt on before they talk. We flash to Willow getting dressed and we see a Dawn of Day tattoo on her lower back……