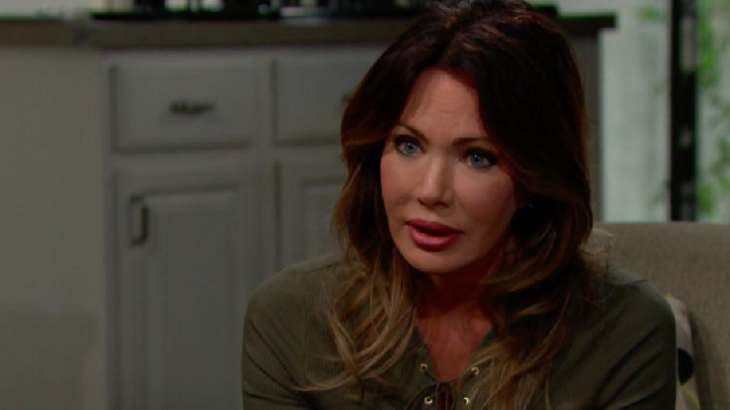 The Bold and the Beautiful (B&B) spoilers for Friday, March 15, tease that both Taylor Hayes (Hunter Tylo) and Bill Spencer (Don Diamont) will have terrible news to pass on to their loved ones. Caroline Spencer (Linsey Godfrey) has died, and Taylor will pass the terrible news onto Steffy Forrester (Jacqueline MacInnes Wood), while Bill updates Katie Logan (Heather Tom) about what’s happened.

The details of exactly how Caroline died will become clear on Friday’s B&B episode, and both the Forrester and the Spencer families will be devastated by the news. Of course, Caroline had a young son Douglas Forrester (Henry Joseph Samiri) with Thomas Forrester (Matthew Atkinson), so the families will be heartbroken for those left behind.

Word will quickly spread of Caroline’s death, and the Forresters and Spencers will gather at the Forrester estate to share their grief and offer each other support. It seems that Taylor and Ridge will be particularly upset that their grandson has lost his mother, and they’ll be very worried about their son Thomas and how he’s dealing with the loss of Caroline.

According to B&B spoilers, Thomas and little Douglas will soon arrive home to be greeted by their friends and family. It will be viewers’ first introduction to Matthew Atkinson as Thomas, and our first introduction to an aged Douglas, who is now about three or four years of age. Thomas will be relieved to be around his family again, as he’s clearly been through a terrible ordeal.

Of course, Thomas and Caroline only recently got back together, after Thomas broke up with Sally Spectra (Courtney Hope) and reunited with Caroline. Sally then returned to Los Angeles and started a relationship with Wyatt Spencer (Darin Brooks), but she’s still held a pretty big grudge against both Thomas and Caroline, so the news about Caroline’s death may hit her particularly hard.

According to B&B spoilers, Sally will come face-to-face with Thomas and will offer her condolences and likely an apology for things she may have said about both Caroline and Thomas during the breakup. Now won’t be a time to hold onto grudges, and Sally will likely want to make things right. B&B spoilers say that she’ll also offer an apology to Douglas for past mistakes and let him know how sorry she is about what’s happened to his mother.

What do you think happened? #BoldandBeautiful pic.twitter.com/tPVWREauRJ

Meanwhile, on the new episode of B&B on Friday, March 15, Bill will be feeling particularly guilty about a past mistake involving Caroline and Thomas. Viewers will remember that at one point, Bill lied to Thomas and told him that Caroline was dying in order to get Thomas to reunite with her. It ended up causing terrible problems between Thomas, Caroline, and Sally. It will pain Bill to recall what he did, and he’ll feel terrible about it in light of Caroline’s death.

Of course, at the time, Caroline was terribly upset with Bill and their relationship never really recovered, so Bill will probably be feeling awful about that. Bill’s recently vowed to become a better person and he’s on a much better path than he was at the time he lied to meddle in Caroline’s and Thomas’ lives. We may see Bill offer Thomas a big apology as well as he seeks amends for past mistakes.

The Bold And The Beautiful Spoilers: Is Caroline Coming Back To B&B?