The Young And The Restless Spoilers: Lola’s Awake and Kyle Is Conflicted – Summer Won’t Tolerate Betrayal 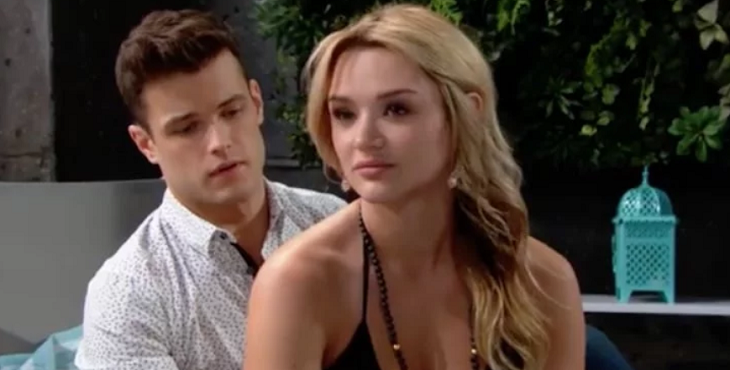 Summer Newman (Hunter King) is deeply concerned that Kyle Abbott (Michael Mealor) will betray her on the Young and the Restless. How rich! Now, as Lola Rosales (Sasha Calle) awakens from her coma, the pressured deal Kyle was forced to accept with his one-time girlfriend will be tested.

It seemed like Kyle’s smile actually betrayed his words. While he agreed to marry Summer, so that she would go through with her half-liver donation offer to Lola, he was clearly withholding his true thoughts.

What legal means would Summer have to keep Kyle married to her if he opted to exit the negotiated nuptials? Well, a contested divorce would create a purposeful delay.  As for moral arguments, Summer would seemingly have none to make.

Kyle A Husband In Name Only

Anticipating her next move, Kyle advised Summer that he would be a husband to her, for a year, in name only. King’s impulsive character was surprised by that request but brushed it off.

She’s thinking that time with her will be all that’s needed to turn their bartered arrangement into a lasting deal. That’s very Victor Newman (Eric Braeden) of her, by the way.

A baby would certainly change matters, as Lola’s feelings for Kyle would absolutely evolve if Syle became parents. That anticipated reality is what Summer sees in the future, which assumes that Kyle will become a father to her first child.

Summer recognizes that Kyle believes he loves Lola. Miss Newman has chosen to believe that her apparent one true love’s feelings are fleeting and that he’ll realize she is actually his destiny. But in order for that to happen, Kyle must be separated from Lola for an extended period of time.

The Young And The Restless News: Justin Hartley Talks Adam Newman Recast – Kevin Pearson’s Fate On This Is Us

Lola’s awakening will directly play into Kyle and Summer’s approach. A true Y&R stunner would have King’s well-played character come to realize that Lola is the right person for Kyle. That’s the type of genuine generosity Summer needs to exhibit, rather than offering half of her liver as part of a manipulative plot to corral Kyle’s heart.

This site is a leading source for everything linked to the Young and the Restless.