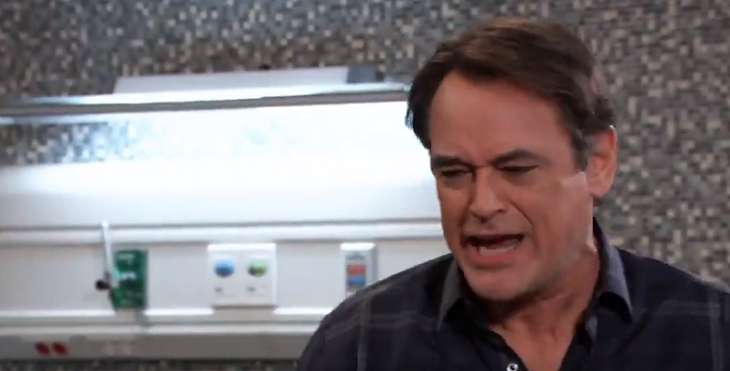 General Hospital (GH) spoilers tease that Dr. Kevin Collins (Jon Lindstrom) may have quite a difficult time rebuilding his life, both professional and personal, after it having been taken over by his psychotic twin Ryan for so many months.

For one thing, Ryan may have depleted a lot of his brother’s finances and accounts during those six months he took over Kevin’s life. Ryan spent more time lavishing his attention on Ava Jerome (Maura West) and killing people and framing others for the murders than he did treating patients. That rock on Ava’s finger probably cost a pretty penny, and you can bet he drained one of Kevin’s accounts dry on that alone.

Observant General Hospital viewers would have noticed that General Hospital did have a poster up for Kevin to do some kind of seminar on March 20th, which Ava took out her frustrations on during the March 14 episode. But that may have been set up earlier when Ryan was still masquerading as the good doctor. Ryan probably sent many of Kevin’s patients elsewhere, since he didn’t want to fool with them, and may have given terrible advice to others, who may have acted on that advice.

General Hospital Spoilers – Some Patients Could Sue The Hospital

It wouldn’t be surprising if some General Hospital patients came out of the woodwork to sue both Kevin personally and the hospital for malpractice, although Kevin himself truly was not at fault. However, such lawsuits may not be hard to fight, considering no one suspected Ryan was masquerading as Kevin.

And no one but Kevin knew Ryan was alive, other than some DVX higher-ups, and they certainly wouldn’t come out in the open and expose themselves to arrest.

Kevin may be put through the wringer by his friends for keeping Ryan’s survival a secret, particularly Mac and Felicia Scorpio (John J. York, Kristina Wagner) and Carly Corinthos (Laura Wright), although maybe not right away. Everyone will just be glad he’s OK and that Ryan didn’t kill him, at first. Once that wears off there may be a lot of questions and a lot of trust to rebuild.

But this is not the first time Kevin’s had to pay his dues, so to speak. Around 20 years ago, after Ryan was assumed to have died the first time, Kevin had to work hard to convince those affected by Ryan that he really was Kevin.

He even had a breakdown where he thought he was Ryan, and stalked and tried to kidnap Felicia. Lucy Coe (Lynn Herring) helped get him out of legal charges for that one.

He did, however, spend some time in a mental facility and didn’t practice psychiatry for a period of time, in which his medical license was revoked. It may or may not happen again this time. Stay tuned to GH and keep checking General Hospital spoilers frequently to see if Kevin is able to bounce back and overcome the damage that Ryan did, and the damage that Kevin himself did by keeping his survival a secret!