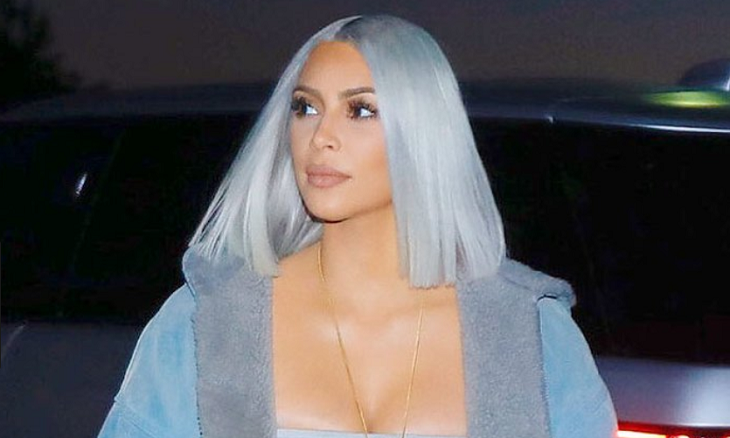 It looks like Kim Kardashian might be taking a page out of her little sister Kylie Jenner’s style book. As a matter of fact, the Keeping Up With The Kardashians star recently sported an ice-blue hair color while she was out and about in Los Angeles this past week. The new hairstyle was very similar to a one that Kylie wore last year.

According to reports, some people had to do a double take just because Kim ended up looking so much like her younger sister. Kim shared a behind-the-scenes photo of her getting her hair done, but didn’t add a caption.

Her fans, however, did all of the talking for her by posting comments such as, “Looking good Kim! You look like you are following in Kylie’s footsteps.”

Kim Dyed Her Hair Platinum-Blonde For Fun Back In 2018

Many eagle-eyed Kardashian fans have noticed this isn’t the first time Kim has supposedly copied one of Kylie’s looks. Back in 2018, Kim tried out a platinum-blonde bob look and wore an ensemble that resembled something that Kylie wore a few months prior to Kim.

Now, no one knows if Kim is trying to keep up with her sister or if she is just taking a quick peak at what’s in her closet. Either way, they say that imitation is a form of flattery. But when it comes to Kim Kardashian and Kyle Jenner, it might also be a form of jealousy!

Kylie Surpassed Big Sister Kim As The Wealthiest At 21

After all, Kylie has surpassed her big sister as the wealthiest person in the Kardashian and Jenner families. And just to think she’s only 21!

Tell us, do you think Kim Kardashian is copying Kylie Jenner with her style and fashion statements? Are you a fan of the ice blue hair? To be honest, we love the hair color!

It’s fun, it’s flirty and hopefully, it’s not permanent. In the meantime, let us know what you think by leaving us a line with your thoughts below.

Also, come back to Hollywood Hiccups for all the latest news, updates and spoilers on the Kardashians and your favorite daytime and reality television programs right here!