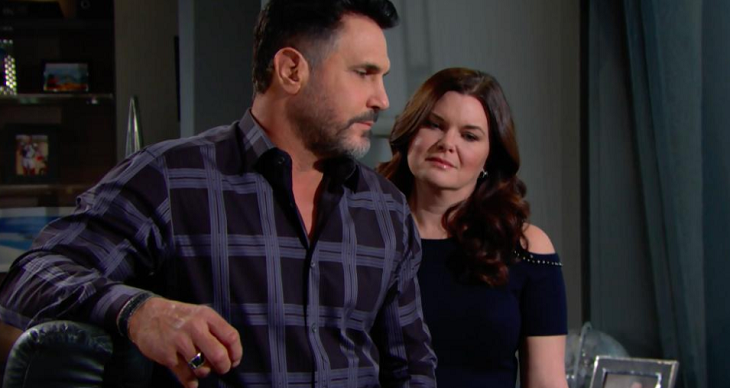 The Bold and the Beautiful (B&B) recap for Friday, March 15 finds a lot of people shocked and devastated over the sudden death of Caroline Spencer (Linsey Godfrey). Also, Bill Spencer (Don Diamont) will look back at some of the things he did in the past with regret. Ridge Forrester (Thorsten Kaye) will recall a previous romance while Liam Spencer (Scott Clifton) gets a request.

At Spencer Publication, Katie Logan (Heather Tom) visits Bill. It’s another day at the office, despite the devastating news that Bill received about Carole. Heather asks him if he’s told their son. Bill says that he will tell him, but just not right now. He then thanks Katie for her support.

Wyatt Spencer (Darin Brooks), Sally Spectra (Courtney Hope), Liam, and Hope Logan (Annika Noelle) all arrive. Bill begins by saying that he didn’t want to tell them any of the details over the phone. Bill says that he will also receive Caroline’s obituary. Katie assures him that none of this is his fault. The others wish that there was something more that they can do.

Over at Ridge’s place, Quinn Fuller (Rena Sofer) is looking for something in the kitchen. He looks distracted. Steffy Forrester (Jacqueline MacInnes Wood) arrives and gives her father a hug. She’s devastated just like everyone else is. Taylor Hayes (Hunter Tylo) appears. She admits that the last phone call she received will change her life forever. Ridge gives her a hug.

Everyone recalls the good times they had with Caroline and express just how much they will miss her. Taylor says that Thomas Forrester (Matthew Atkinson) said that it was a blood clot. Bill and everyone else that was at Spencer Publications arrives at the house. Thomas is also there. He’s numb and he hasn’t had much sleep. Douglas (Henry Joseph Samiri) says hi to his grandfather. Steffy can’t help but notice how much Douglas has changed.

#BoldandBeautiful recap had a cliffhanger with Taylor and Bill both receiving horrible news, also Bill and Katie realized they were set up, and Ridge visited with Liam. https://t.co/ZdW6w7yxgc pic.twitter.com/KTGvT1vRM3

Thomas then has a heart-to-heart conversation with Liam and Wyatt and ask both of them if they could be godparents to Douglas. They are flattered by the gesture and agree. Bill approaches Thomas. He tells him that Caroline forgave him before her death. Wyatt also tries to get Sally to say something to Thomas.

Sally apologizes for the hurtful words she’s said and what happened in the past. Thomas bursts into tears and tells everyone just how much he appreciates them being there for him. He also says that Caroline would be happy to see that he and Douglas are there with family – at last. The Bold and the Beautiful airs weekdays. Check your local listings for times.

In the meantime, don’t forget to check back with Hollywood Hiccups for all the latest news, updates and spoilers on The Bold and the Beautiful right here.