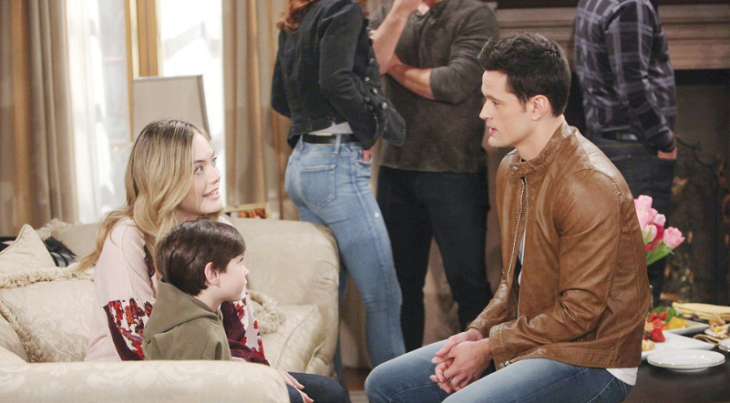 The Bold and the Beautiful (B&B) spoilers for Monday, March 18, tease that Thomas Forrester (Matthew Atkinson) and Douglas Forrester (Henry Joseph Samiri) will get all of the support of the Forresters and Spencers in the wake of Caroline Spencer’s (Linsey Godfrey) death. Caroline died suddenly of complications related to a blood clot and has tragically left Thomas and Douglas behind.

According to B&B spoilers, Ridge Forrester (Thorsten Kaye) and Taylor Hayes (Hunter Tylo) will welcome their son back into the fold and will have a nice reunion despite the tragic circumstances. Steffy Forrester (Jacqueline MacInnes Wood) will also spend some quality time with her brother, and she’ll let him know about her plans to leave Los Angeles for Paris.

While Wyatt looks on, Sally apologizes to Thomas for everything that happened between them in the past today on #BoldandBeautiful. pic.twitter.com/sHisYEkomc

Given what’s happened with Caroline, it seems that Ridge and Taylor will be expecting Steffy to put her Paris plans on hold for a while, but Steffy will reveal that she’s still planning to take Kelly Spencer (Chloe Teperman and Zoe Pennington) and Phoebe Forrester (Isabella de Armas and Redford Prindiville) and leave town for an extended visit.

Chances are, Thomas will agree with Steffy’s plans, and he won’t want her to put her life on hold for his sake. Plus, he’ll probably understand Steffy’s reasons for wanting to leave Los Angeles for a while – after all, Liam Spencer (Scott Clifton) and Hope Spencer (Annika Noelle) have also suffered a tragic loss and need some space to heal and work on their marriage.

Meanwhile, on the new episode of B&B on Monday, March 18, Douglas will make a new friend. Of course, he’s too young to fully understand what’s happened to his mother, and he’s simply enjoying being around his family again. According to B&B spoilers, Douglas and Hope will form a little friendship as Hope keeps him distracted while Thomas grieves with family.

Still grieving the loss of Beth Spencer, Hope will quickly connect with Douglas, and the two will bond. They’ll each benefit from spending time together, and Hope will enjoy taking a motherly role with the young boy. B&B spoilers say that Thomas will notice how Douglas is taking to Hope and that he’ll be appreciative of all the attention that Hope is lavishing on his son.

B&B spoilers also say that Taylor will soon notice Hope’s kind behavior toward Douglas, so it looks like these two will be spending quite a bit of time together. Going forward, Hope may take a crucial role in Douglas’ life, since it seems that Thomas and Douglas are going to be on the B&B scene to stay. And this may help Hope to deal with Beth’s death going forward.