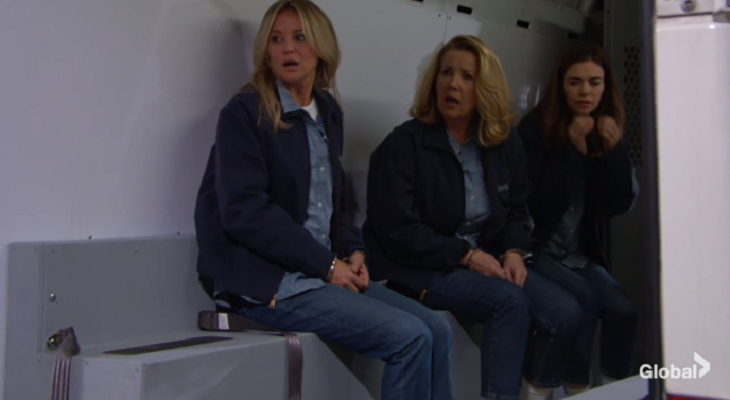 The Young and the Restless (Y&R) spoilers for Monday, March 18, tease that Sharon Newman (Sharon Case), Victoria Newman (Amelia Heinle), and Nikki Newman (Melody Thomas Scott) will be shuffled into a van in route to prison. Meanwhile, Billy Abbott (Jason Thompson) and Nick Newman (Joshua Morrow) will arrive at Rey Rosales’ (Jordi Vilasuso) apartment. Nick will tell Rey that this is his chance to make things right.

At the Abbott estate, Abby Newman (Melissa Ordway) and Arturo Rosales (Jason Canela) will chat about Lola Rosales’ (Sasha Calle) upcoming transplant. Meanwhile, at the hospital, Nate Hastings (Brooks Darnell) will chat with Lola, who will ask where Kyle Abbott (Michael Mealor) is.

RT if you feel the same way as Abby. 😡 #YR pic.twitter.com/0ASwiZufLc

Meanwhile, on the new episode of Y&R on Monday, March 18, Mia Rosales (Noemi Gonzalez) will be in her hotel room and she’ll remember Rey telling her that he’s in love with Sharon, then she’ll remember arguing with Arturo on the night of the snowstorm, and Arturo coming back to the apartment to see her. Back in present day, Mia will call Arturo and summon him to her hotel room.

Back at Rey’s, Nick and Billy will say that there’s been a setup, and they’ll tell Rey about the mystery intruder at the Newman ranch. Billy will relay that the intruder sang his daughter a song and that it’s the same song that JT Hellstrom (Thad Luckinbill) wrote years ago. They’ll get Rey to start to believe that JT may be alive, and Rey will agree to help them find JT.

In Mia’s hotel room, Mia will berate Arturo for coming back to her apartment the night of the snowstorm, and they’ll discuss how they actually made love that night. Arturo will tell Mia to work things out with Rey since Sharon isn’t an option for Rey anymore. Mia will tell Arturo angrily to tell Rey to take her back, or else she’ll tell Abby that the two of them had sex.

Summer tells Kyle that she’s worried about the surgery tomorrow.

Next, on Monday’s episode of Y&R, Phyllis Summers (Gina Tognoni) will approach Nick at Crimson Lights, and he’ll give her a chilly reception. They’ll discuss Summer’s marriage, and Phyllis will say that she cares about Nikki, Victoria, and Sharon, but Nick will berate her for only caring about herself. Then, Nick will get a text from Billy saying, “we’re good to go” and leave.

At the hospital, Summer and Kyle will arrive to see Nate. Summer will be very nervous and won’t want to talk about the details; she’ll just want to get it over with. Kyle will ask if Summer wants him to tell Nick and Phyllis what’s going on, and she’ll say no. Meanwhile, Arturo will arrive at Lola’s bedside and she’ll ask if Kyle’s there yet, and Arturo will say that he’s probably just giving her space. Lola will say that she wishes she could find out who the donor is.

Back at Crimson Lights, Mia and Phyllis will talk about Summer and Kyle’s wedding and about how love is complicated. Phyllis will say that she’s sorry to hear about what happened to Lola, and Mia will say that Lola is strong and will pull through it. Abby will arrive and she and Mia will bicker per usual. Mia will blabber about family and how important it is, while Abby looks stunned.

The prison van will stop and the ladies will be told to get out in the middle of nowhere but they won’t want to do. Suddenly Nick will appear at the back of the van and tell them that it’s ok and they’re safe.

Back at the hospital, Summer will be prepped and ready for surgery, and she’ll be worried that Kyle will bail on her once Lola gets her liver. Kyle will reassure her that she’s going to be okay and that he’ll be right there when she wakes up. Summer will be rolled into surgery, terrified. They’ll declare their love for each other as Summer is taken away.

In Lola’s room, Rey and Arturo will bid Lola goodbye before she’s taken into surgery, while Abby waits outside. She’ll run into Kyle and ask him sarcastically why he’s not with his new bride.

Finally, on Monday’s Y&R episode, Nikki, Sharon, Victoria, and Nick will arrive at the Abbott cabin to find Billy and Rey waiting. Rey will tell the ladies that prison time isn’t an answer for what they’ve been through and that he needs to fix what he did and make it right. Rey will leave, and Billy and Nick will tell them that the official story will be that they escaped and are now fugitives and that they’re about to set a trap for JT.

The Young And The Restless Spoilers: Billy And Nick Team Up—Katie Reveals Her Friend’s Identity—Leads To J.T. Discovery