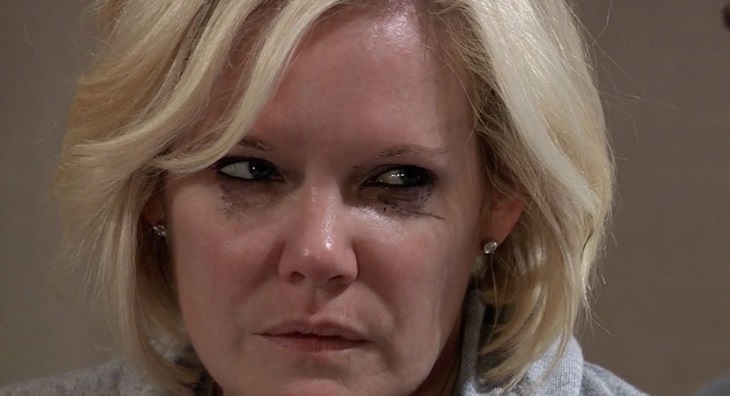 General Hospital (GH) spoilers for the week of Monday, March 18 through Friday, March 22, 2019, reveal loving sacrifices, family bonds that grow while help is offered. Several women in Port Charles deal with conflicted emotions, including extreme rage. A mother fears the worst while shocking discoveries are made. A shot rings out and the fall out could be epic. GH fans will not want to miss out on everything happening in Port Charles starting on Monday, March 15 on the ABC soap opera!

GH sources reveal that Dante Falconeri’s (Dominic Zamprogna) return is nothing like views of the ABC daytime drama were expecting. His father, Sonny Corinthos (Maurice Benard0 has been in desperate search for his son, unfortunately, Sonny ends up in the wrong place at the wrong time and karma seems to play a huge role here; especially for longtime fans who will remember when Sonny shot Dante point blank, before learning they were father and son. Sonny, who has never feared death, is willing to risk everything for his family and loved ones and it looks like it might just happen when Dante shoots his own father!

Back in Port Charles, Michael Corinthos (Chad Duell) seems to thoroughly enjoy time with his grandfather, Mike Corbin (Max Gail) and even takes the time to bring him to a barbecue. Will Mike be able to stay lucid long enough for the two to enjoy the time they have together?

General Hospital spoilers show that Ava Jerome (Maura West) is wrestling with her complicated history with Ryan Chamberlain (Jon Lindstrom), the man she fell madly in love with thinking he was Dr. Kevin Collins. In the meantime, Laura Webber (Genie Francis) also deal with her conflicted feelings when it comes to her newly reunited Kevin. Will she be able to shake her anger towards Kevin for lying about keeping his brother, Ryan alive and hidden at Ferncliff this entire time? It seems Felicia Scorpio (Kristina Wagner) is equally furious with the situation and finds it very difficult to let go of the past, especially since it has crept back into her current life!

GH’s Willow Tait (Katelyn MacMullen) deals with a lot of emotions this week as she panics when the new love of her life, Detective Harrison Chase (Josh Swickard) plans a romantic getaway with Willow. Willow appears to have more going on with her life when she is startled to see that she and Daisy have matching tattoos. Could these be the branding it takes to officially belong to the group “Dawn of Day”?

In other General Hospital spoilers, Alex (Finola Hughes) returns to Port Charles to confirm everything Anna Devane (Finola Hughes) and Dr. Hamilton Finn (Michael Easton) have suspected along with WSB agent Robert Scorpio (Tristan Rogers); but what does this mean about Anna’s relationship with both Peter August (Wes Ramsey) and Valentin Cassadine (James Patrick Stuart)? A beloved character is hauled away in handcuffs, but will Jason Morgan (Steve Burton) be able to beat the newest charges against him?

Be sure to tune into ABC’s General Hospital (GH) on Monday, March 18, 2019, to catch up on everything happening in Port Charles right now. Check Celebrating the Soaps often for updates, news, rumors and spoilers!