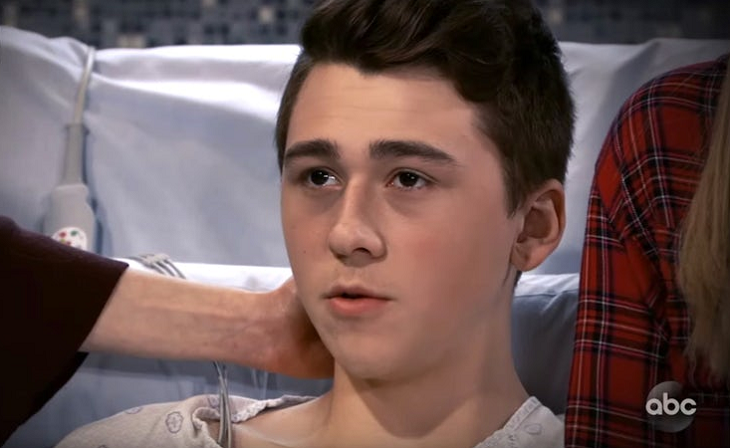 General Hospital (GH) spoilers for Tuesday, March 19 tease that Elizabeth Webber Baldwin (Rebecca Herbst) is conflicted as she has something to say to her new husband Franco Baldwin (Roger Howarth) but she doesn’t know how to say it. Is she again wanting space because she can’t trust him because he was sworn to secrecy by Jordan Ashford (Briana Nicole Henry) about their plan?

A concerned Julian Jerome (William DeVry) answers an important phone call. He asks the caller if everything is ok – but is it his sister or his girlfriend? Ava Jerome (Maura West) is a mess after Ryan Chamberlain (Jon Lindstrom) tore her life apart, and Dr. Kim Nero (Tamara Braun) may have just gotten devastating news!

Oscar’s Results Are In

Meanwhile, at General Hospital, Kim is approached by a very serious Drew Cain (Billy Miller) her son Oscar Nero’s (Garren Lake Stitt) birth father. Oscar, who had a major seizure while he, his girlfriend Josslyn Jacks, (Eden McCoy) and friends were at Niagara Falls, had some new tests run to tell if his inoperable brain tumor had gotten worse. Drew tells Kim that the results are in. Is the news good or bad?

Alex is back in Port Charles and she's already given Anna a headache. Can they put aside their differences long enough to answer a few questions?#GH is brand-new and STARTS NOW on ABC! @finolahughes #GH55 pic.twitter.com/I7CajlDev5

Elsewhere in General Hospital, a frustrated Anna Devane, (Finola Hughes) supported by her boyfriend Dr. Hamilton Finn (Michael Easton) who is standing beside her, threatens her twin sister Alex Marick (also Finola Hughes) if she doesn’t give her the information she needs! She tells her Finn will not restore her sight if she does not spill her secrets about which memories Anna thinks are hers are really Alex’s!

Then, Carly Corinthos, (Laura Wright) seems also frustrated; with a tearful, pouty Ava Jerome (Maura West) who she tells to pull herself together and step up! Could even Carly feel sorry for Ava with what she’s been through? It sounds like she’s trying to tell Ava to put her big girl panties on and deal with life! General Hospital viewers have to wonder if Carly was at least decent enough to thank her for her part in saving her and her unborn baby’s life!

"I'm getting everything I want." #GH55 pic.twitter.com/kSiXEOtyt6

Finally, still in Ankara, Turkey, Dante Falconeri (Dominic Zamprogna) asks his father Sonny Corinthos, (Maurice Benard) who is in a jail cell in Raj Patel’s (Noshir Dalal) compound, what he’s talking about. Dante had told Sonny that he was just about to be able to leave Turkey for Port Charles, having gained Raj’s trust, by making a fake deal with him that he was going to work for Raj but inside the PCPD, and then Sonny came and ruined it all!

Dante said he can’t even guarantee that Raj won’t kill Sonny, and Sonny told him Raj can’t kill him if he kills him first! It sounds like Sonny has a plan to play dead and Dante has to convince Raj that he killed him, and tells Dante to trust him.

It sounds like another exciting episode full of drama and twists! Stay tuned to GH and keep checking General Hospital spoilers for all the latest news, updates, and spoilers!