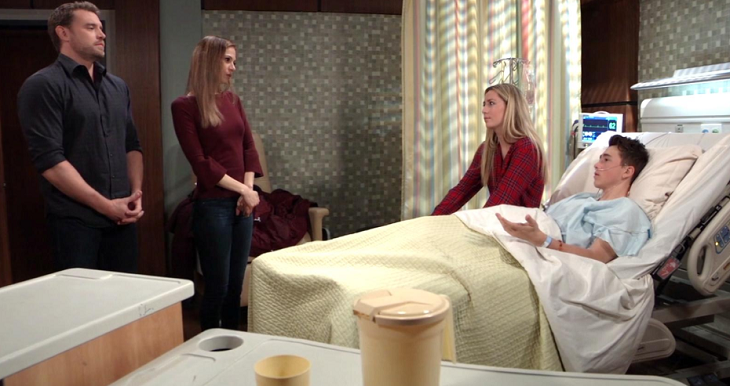 General Hospital (GH) spoilers tease that Oscar Nero (Garren Lake Stitt) may not have quite as much time left as he had hoped; barring a last minute miracle cure is found for his inoperable brain tumor. As General Hospital viewers will recall, Shiloh Archer (Coby Ryan McLaughlin) had told Oscar’s parents, Drew Cain (Billy Miller) and Dr. Kim Nero (Tamara Braun) that Oscar had reached out, presumably to him, about alternative treatments. However, Kim wisely turned Shiloh down. As General Hospital viewers are rapidly learning about Shiloh, Oscar doesn’t need his kind of “treatments!”

Oscar does want to live and make the best of his life – whatever may be left of it. Shiloh was correct in saying that miracles happen more often than one might think, but Oscar is doing a huge turnaround from not wanting to be in the trial, that didn’t work, to looking for alternative treatments on his own! The will to live plays a big part in a terminal patient’s ability to fight whatever the terminal disease is, and studies have shown that patients with a strong will to live do survive longer than patients who just give up, according to articles in the website of The National Center for Biotechnology Information, U.S. National Library of Medicine, otherwise known as www.ncbi.nlm.nih.gov.

Of course, as Oscar awaits his results from the latest round of tests on his tumor, the biggest fear for Oscar, his parents, and girlfriend Josslyn Jacks (Eden McCoy) will be that the tumor is accelerating, therefore hastening Oscar’s inevitable death. The fact that he suffered a major seizure while at Niagara Falls shows that something has changed with the tumor, and obviously not for the better!

The type of tumor Oscar has is in a spot inside his brain that is inaccessible to surgeons and when first diagnosed as a child, was probably one that has a relatively long survival rate…until it starts to grow or spreads to other organs. These would be the types of tests that Oscar and his family are waiting on; to see if it’s grown, and to see if it has spread. If it has spread, there is practically no chance of Oscar’s surviving it, and it is only a matter of time before he dies.

Stay tuned to General Hospital and keep checking GH spoilers frequently to see if Oscar gets a miracle, or if he’s doomed to die!