The Bold and the Beautiful Spoilers: Tuesday, March 19 – A Memorial For Caroline – Thomas Watches As Hope & Douglas Bond 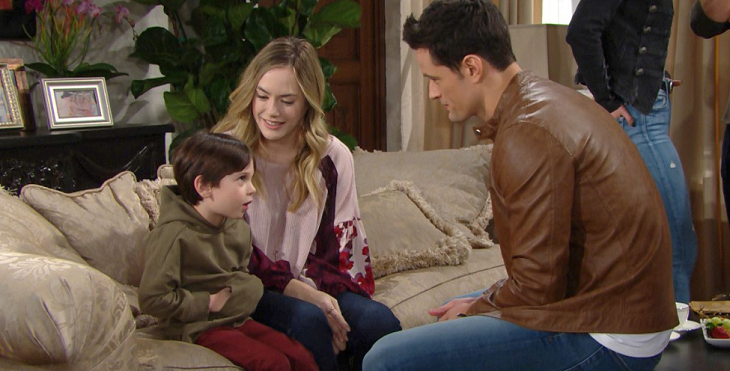 The Bold and the Beautiful (B&B) spoilers for Tuesday, March 19, tease that the Forresters, Spencers, and Logans will gather for a memorial service for Caroline Spencer (Linsey Godfrey). They’ll all honor Caroline’s memory and say their goodbyes to their beloved family member who is gone too soon.

Of course, most of the family’s attention will be turned toward Thomas Forrester (Matthew Atkinson) and little Douglas Forrester (Henry Joseph Samiri) in their time of loss. The family will grieve together and support Thomas and Douglas as best they can.

According to B&B spoilers, Hope Spencer (Annika Noelle) will be particularly important in helping Douglas cope with what’s going on around him. Douglas seems to understand that his mother is in heaven, but since he’s just a kid it’s all pretty confusing for him. Hope and Douglas have become fast friends, and they spent some time in the Forrester kitchen talking about Caroline and heaven.

When tragedy strikes, a family fights to find strength this week on #BoldandBeautiful. ❤️ pic.twitter.com/OzMfV6qtD6

On Tuesday’s episode of B&B, Hope and Douglas will remain close, and Thomas will be touched to see the connection forming between them. Douglas seems to really miss his mom, and in a way, Hope fills the void. Of course, Thomas will also know that Hope recently lost her daughter, so he’ll understand that Douglas fills a void for her as well.

But Thomas isn’t the only one who will have noticed the bond forming between Douglas and Hope. Taylor Hayes (Hunter Tylo) noticed Hope and Douglas interacting in the kitchen, and she saw how well Douglas responded to Hope. Of course, Taylor has a one-track mind when it comes to Hope…she’d like Hope to divorce Liam Spencer (Scott Clifton) so that Liam will go back to her daughter Steffy Forrester (Jacqueline MacInnes Wood).

B&B spoilers say that all of this is building toward Taylor pushing Hope and Thomas together. She’ll eventually get it in her head that Hope and Thomas would be a good match, and it looks like she’ll take action to push these two together as a means of breaking up “Lope” and paving the way for a “Steam” reunion.

At any rate, in the days to come, B&B spoilers say that Hope and Douglas will spend more time together, as Hope arranges for Douglas to visit her cabin for a little adventure. Of course, the more time that Hope spends around Douglas, the more time she’ll likely spend around Thomas, which should please Taylor.