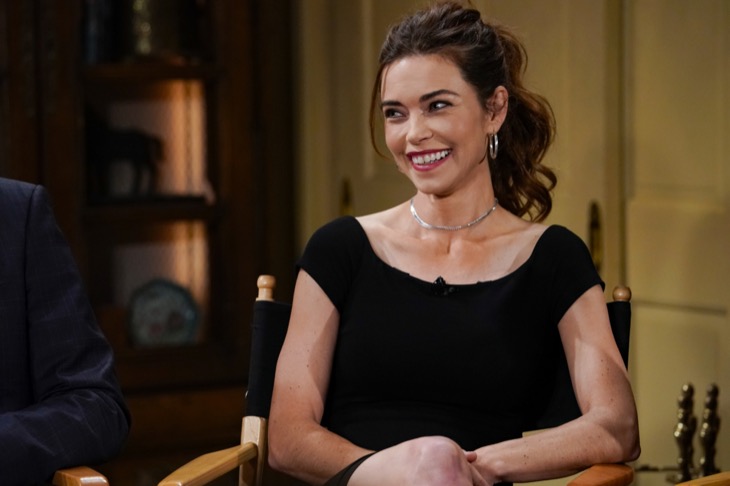 The Young and the Restless (Y&R) spoilers for Tuesday, March 19, tease that the women will settle into the Abbott cabin. Victoria Newman (Amelia Heinle) won’t be convinced that JT Hellstrom (Thad Luckinbill) is really alive, but Billy Abbott (Jason Thompson) will relay to her that the intruder at the ranch sang JT’s song. Nikki Newman (Melody Thomas Scott) will want to help find JT, but Nick Newman (Joshua Morrow) will state that none of them can be seen, as they’re now fugitives.

Rey Rosales (Jordi Vilasuso) will call and talk to Sharon Newman (Sharon Case). He’ll tell her that his decision to help them wasn’t easy, but that he owes it to her to make things right. Nick and Billy will leave with two police officers guarding the place.

Victoria will worry that they haven’t thought this plan through well enough. After all, if the plan fails, they’ll still go to prison. She’ll also worry about JT possibly hunting them down or harming Nick and Billy since she knows what JT is capable of. The women will also discuss Rey’s decision to help them, and Nikki will remark that she hopes Rey loves Sharon desperately because their future is in his hands.

Meanwhile on Y&R, at Devon Hamilton’s (Bryton James) place, Ana Hamilton (Loren Lott) will put a cash-filled envelope in her purse. Devon will arrive, and she’ll tell him she’s going to meet a potential new artist. She’ll drop her purse and the envelope will spill out. She’ll pick up everything and leave, with Devon following behind.

At the hospital, Abby Newman (Melissa Ordway) will talk with Kyle Abbott (Michael Mealor) and will guess that Summer Newman (Hunter King) is Lola Rosales’ (Sasha Calle) liver donor. She’ll state that Summer must have blackmailed him into the marriage, but Kyle will insist that’s not true and that he and Lola had too many differences.

Arturo Rosales (Jason Canela) will show up and state that he’d respect Kyle if Kyle married Summer to save Lola, but Kyle will say that’s not true. Arturo will berate Kyle a bit, and Kyle will leave once he knows Lola came through the surgery okay. Rey will appear along with Nate Hastings (Brooks Darnell), who will say that everything went smoothly with the surgery.

Next, on the new episode of Y&R on Tuesday, March 19, Kerry Johnson (Alice Hunter) will arrive at the Abbott estate where Jack Abbott (Peter Bergman) has been playing with Victoria’s kids. Kerry will get a call from Phyllis Summers (Gina Tognoni), then assure Jack that she’s still going to help him because business is cutthroat.

At Crimson Lights, Mariah Copeland (Camryn Grimes) and Tessa Porter (Cait Fairbanks) will discuss Kyle and Sharon. Mariah will be feeling helpless due to Sharon’s situation, and they discuss Mariah doing some segments on GC Buzz to tell the women’s stories and hosting a rally.

Meanwhile, on Y&R, Devon will follow Ana to a motel. He’ll watch Ana enter a room and he’ll knock on the door. A woman will come to the door, and on his second attempt to talk to her, Ana will appear at the door, peeved that he followed her. Devon will ask Ana if this is where her money has been going, and he’ll see a man in the room. Devon will ask why Jet Slade, who is an old R&B star, is there.

Jet will explain that his health is poor, and the woman who answered the door will introduce herself as Elena Dawson (Brytni Sarpy), Jet’s nurse and his niece. Ana will tell Devon that she’s been helping to pay for Jet’s treatments, and that Jet is her father. Devon will wonder why Ana never told her about her father, and Ana will say that she and Jet didn’t want any handouts.

At Victoria’s house, Billy and Nick will find a listening device and they’ll call Rey, who’ll say “you know what to do.” The two will then hold a bogus conversation during which they discuss taking the women to the Dark Horse warehouse in preparation to fly them out of town.

Waiting for the court results like… Do you think Nikki, Victoria, and Sharon will get good news tomorrow? #YR pic.twitter.com/dqLz3xnKeZ

Back at the hospital, Rey will see that he’s getting a call from Paul Williams (Doug Davidson), and Nate will appear on the scene and relay that the transplant was a success. Kyle will track down Nate to learn about how Summer’s end of the surgery went, and Nate will state that it didn’t go so well.

Finally, on Tuesday’s episode of Y&R, Nikki, Victoria, and Sharon will chat in the cabin, but little will they know that JT is watching them from outside, wearing a police uniform.