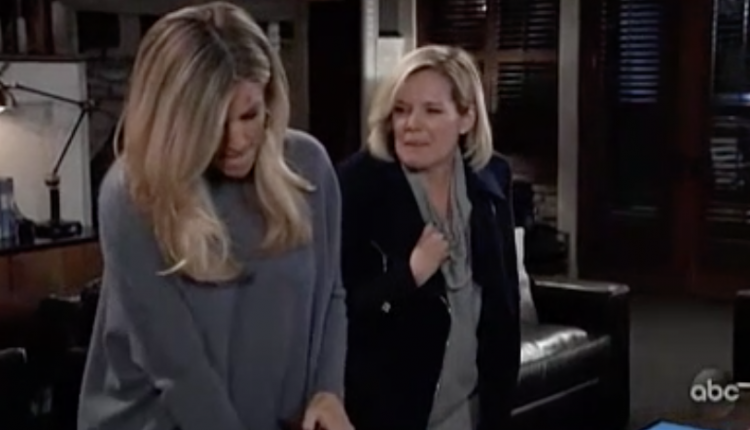 Welcome to your Tuesday, March 19 General Hospital recap! We begin our day at the hospital where Alex (Finola Hughes) is enjoying a cup of hot tea. Finn (Michael Easton) and Anna (Finola Hughes) say she won’t get her sight back until they get the information they want. At the hospital also, Franco (Roger Howarth) is preparing to be released finally. In Oscar’s (Garren Stitt) hospital room, he’s discussing with Josslyn (Eden McCoy) and Cameron (William Lipton) how great Niagra falls looked from the helicopter. Drew (Billy Miller), Kim (Tamara Braun), and Terry (Cassandra James) are discussing Oscar’s test results in the hospital hallway.

In Ankara Turkey at the jail, Sonny (Maurice Bernard) tells Dante (Dominic Zamprogna) to trust him – he must kill him. Dante says the plan is risky, but Sonny says it must work because Carly is pregnant. Dante is worried that what he has seen in Turkey may haunt him back in Port Charles.

At Carly’s (Laura Wright) house a drunk Ava (Maura West) shows up and wants to see Avery. Carly explains that Avery is at the Quartermaine’s with her cousins. Ava tells Carly that she is the big winner, she finally has her way. Carly says that she alienated Kiki to a drunk and sad Ava, Ava retorts that she alienated her and eventually wound up in bed with her daughter’s killer. Carly tries to encourage Ava to be strong and to stop being a coward. Ava screams out that she didn’t plan on any of this and begs Carly to help her. Carly says it’s not her fault Ryan killed Kiki and that she needs to call someone to pick her up. Julian shows up at Carly’s and Ava is asleep on the couch.

Elizabeth is worried that every time something bad happens in town, he will be blamed. She’s worried about the kids and how all of this will affect them. Liz leaves and Drew comes in to check on Franco, he brings him coffee. Cameron shows up with a gift for Franco from his brother’s. Drew runs into Elizabeth and explains that she is a comfort to Franco and he needs her. He advises Elizabeth to give him another try and to trust him. Cameron says that everything Franco has done in the past comes back to bite them. Elizabeth returns and discusses how her kids love Franco because their dads can’t be there. She tells Franco she loves him and he says it back. Franco says he will never, ever hurt her intentionally and Liz asks him to come home.

Cameron asks his friends what to do about the Franco situation. He feels like his mom should just unload Franco altogether. The friends say this is not his choice, it’s his mother’s decision. Kim, Drew, and Terry show up at Oscars with the test results. She says that the tumor has grown and is dangerous. She says that he probably has a month to 6 weeks to live. Oscar asks everyone to leave so he can talk to his mother alone. He says that everything he’s learned about life he learned from her. (this is so sad, amazing acting by Tamara Braun)! They embrace as Oscar’s cries that he doesn’t want to leave her.

Oscar's friends are a godsend, West Coast. But will their presence help the soften blow of bad news? #GH is brand-new and STARTS NOW on ABC! @itsgarrentho #GH55 pic.twitter.com/9DBcIgemv4

Alex continues to go in circles and not give any information on the memory transfer process. Alex is being very difficult and says she may have some unpleasant truths to share. Alex says that she is the one in control of the situation. If she shares what she knows, she wants no WSB jail time. They come to an agreement to let her have the surgery.

Sonny tells Dante he loves him as he walks away from the jail. As Ava leaves Carly’s she says, “Now, you have leverage on me.” Carly says if she cleans up her act, she won’t use it against her. Cut to preview….