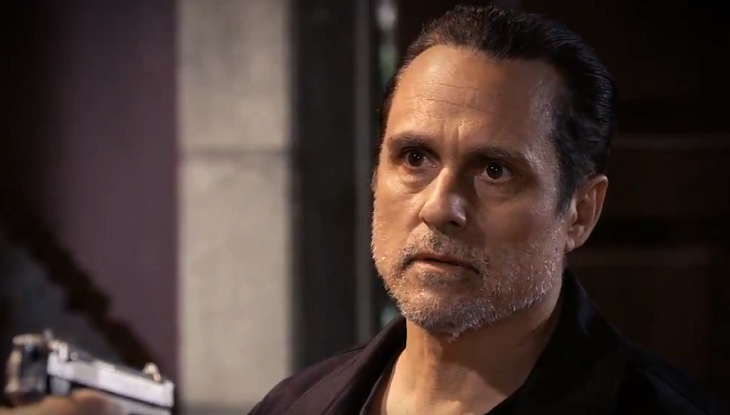 General Hospital (GH) spoilers tease that Sonny Corinthos (Maurice Benard) will give a possibly unbelievable command in Turkey. Will he offer to trade places with Dante Falconeri (Dominic Zamprogna) to give Raj Patel (Noshir Dalal) what Sonny thinks he wants?

On Friday, March 15, we already saw that Dante was forced to shoot Sonny and that a gun had already been fired, so Sonny can’t be telling Dante to shoot. On the other hand, the wording implies a command, not a request. What could Sonny be talking about?

Since General Hospital viewers now know that Dante is not a hostage, or doesn’t appear to be, Sonny trading himself for Dante will probably not be an option. Dante, playing like an undercover cop on a drug deal, seems to have played the part of defecting over to Raj’s side. The WSB probably wouldn’t have approved of this. But Dante knew his plan would work, so that’s why he went rogue, as Robert Scorpio (Tristan Rogers) put it.

General Hospital Spoilers – Will Dante Trick Raj And The Others?

One possibility that other General Hospital spoilers tease is that Sonny and Dante will trick Raj and the others. Sonny was already signaling Dante with his eyes when they first spotted each other. Is he trying to get Dante to do the “Jason Shuffle” with him, like when Sonny takes on some of them while Jason Morgan (Steve Burton) would take on some and get them all overpowered?

They are outnumbered, and Sonny has no gun while Dante used his only bullet. Other General Hospital spoilers tease that Dante does shoot Sonny, but probably not to kill, or Sonny could have a bullet-proof vest on and pretend to be down. General Hospital viewers have seen that tactic used before in many scenes, not just ones with Sonny.

General Hospital Spoilers – Father And Son Likely Have A Plan

Sonny could grab Raj’s leg and wrestle him down to the floor, but with the other two goons having guns that may not be a wise move. He may be able to trip one of them with his leg though. Dante may not be able to get to them fast enough to try a Jason move like knocking their heads together to knock them out.

But it sounds like father and son have some kind of silent plan that they’ve signaled each other with to get out of that mess. Maybe Sonny’s extraordinary command is merely, “LET’S GO!”

Stay tuned to GH and keep checking General Hospital spoilers frequently to see how Sonny and Dante get away from Raj and the goons and back to Port Charles!