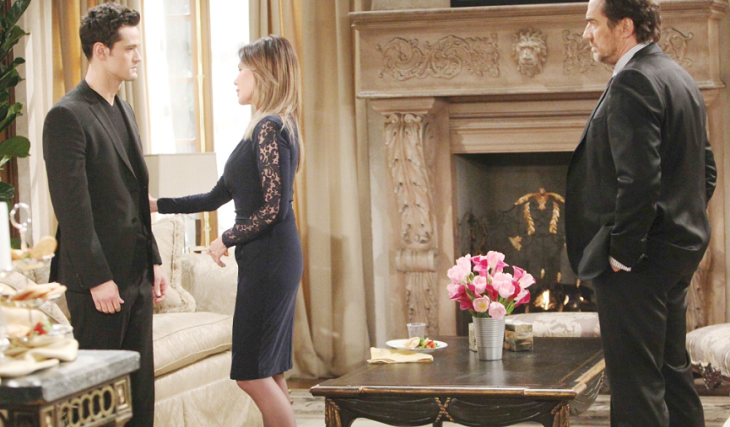 Bold And The Beautiful Spoilers — Hope Connects With Douglas

Everyone is still mourning the loss of Caroline at Brooke Logan’s (Katherine Kelly Lang) house. They reflect on the good memories they had with her during a service dedicated to her life. Hope Logan (Annika Noelle) is especially emotional, as she tries to help young Douglas Forrester (Henry Joseph Samiri) during this difficult time.

Taylor pulls Ridge to the side. She can’t believe that Brooke isn’t here with them, even though Steffy managed to postpone her trip to Paris. Ridge dismisses Taylor’s concerns and wants to focus on Thomas instead. Thomas, meanwhile, tells his family that he’s home now and that Douglas is home, too. After everyone leaves the service, Hope offers to take Douglas with her back to the cabin. This leaves Thomas alone with Taylor and Ridge. His father tells him to take care of his son and that in return, the family will take care of him.

Thomas tells his parents that he and Caroline weren’t together during the time of her death. Even though he left Sally Spectra (Courtney Hope) to be with Caroline, things didn’t work out between them. Taylor can’t believe what she’s hearing. Thomas says that despite the fact that they were not together as a couple, they were still best friends. Ridge offers Thomas for him and Douglas to move in with him.

At Spencer Publications, Katie (Heather Tom) tells Bill Spencer (Don Diamont) and Liam Spencer (Scott Clifton) that their speeches at Caroline’s memorial were heartfelt. Katie believes that before she died, Caroline forgave Bill and everything he did to her in the past. Bill says that even though Douglas doesn’t have a mother anymore, he can count on the Spencer family to always be there for him. Everyone, including Wyatt (Darin Brooks), gathers around to remember the good times with Caroline. Bill admits that Caroline was like the daughter that he never had.

Bold and the Beautiful Spoilers– Taylor Has An Idea

Back at the cabin, Hope and Douglas are bonding. They are playing a game of Go Fish. Thomas is relieved that Hope is comforting them during this painful time in their lives. At Brooke’s house, Ridge and Taylor discuss Thomas and Caroline’s break up.

Taylor then thinks that Douglas and Hope should be together. After all, Douglas is in need of a mother and Hope is in need of a child. The Bold and the Beautiful airs weekdays on the CBS network. Check your local listings for times.

In the meantime, come back to Hollywood Hiccups for all the latest news, updates and spoilers on The Bold and the Beautiful right here.