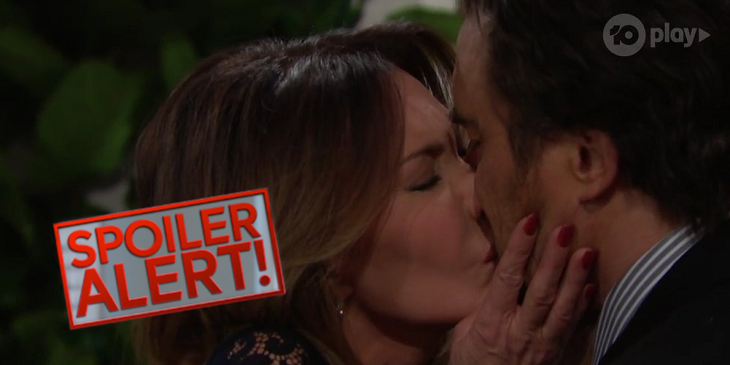 The Bold and the Beautiful (B&B) spoilers for Wednesday, March 20, tease that “Cupid,” aka Justin Barber (Aaron D. Spears) and Donna Logan (Jennifer Gareis), will strike again! Justin and Donna are determined to bring Bill Spencer (Don Diamont) and Katie Logan (Heather Tom) back together again. They’ve noticed the strong renewed connection between Bill and Katie, but they’ve also noticed that the two need a little push if they’re going to get back together again.

“Batie” will again enjoy their time together. It will probably be a much-needed respite from all of the sadness surrounding Caroline Spencer’s (Linsey Godfrey) death. B&B spoilers say that the two will have a nice evening together and will enjoy each other’s company immensely. They’ll discuss just how much each other has grown and all of the joy that Will Spencer (Finnegan George) has brought into their lives.

In addition, Katie will likely point out that Bill has stepped up to become exactly the kind of father that Will needs. Katie finds Bill most attractive when he’s being a doting father to their son, and she’ll praise Bill’s efforts and how far he’s come as a dad. Bill will probably note that he couldn’t ask for a better mother for Will than Katie, and the two will bond over their son.

Today on #BoldandBeautiful, Thomas lets his guard down and tells his parents the truth about what was happening in NYC. pic.twitter.com/MACLIW8uK4

But will Bill and Katie figure out who set their evening in motion? They’ve had their suspicions that Justin and Donna have been working behind the scenes to bring them together, and the surprise dinner will probably pretty much confirm their suspicions. But it doesn’t seem that they’ll mind. In fact, B&B spoilers say that both Bill and Katie will secretly hope to have another “accidental” meeting with each other.

Meanwhile, on the new episode of B&B on Wednesday, March 20, Taylor Hayes (Hunter Tylo) will do something totally unexpected. She and Ridge Forrester (Thorsten Kaye) have been together quite a bit lately, comforting each other in the wake of Caroline’s death. They’ve really come together as a family to support Thomas Forrester (Matthew Atkinson) and Douglas Forrester (Henry Joseph Samiri).

But on Wednesday’s episode, Taylor will take things a bit too far. According to B&B spoilers, Taylor and Ridge will talk about the past and Taylor will relive a moment from their past. As she does so, she’ll plant a big kiss on Ridge! It looks like they’ll both be caught up in the moment for a brief period, but unbeknownst to them, they won’t be alone.

Brooke Forrester (Katherine Kelly Lang) will be standing in the wings, watching the kiss unfold. Of course, Brooke will be horrified and angry at both Taylor and Ridge for allowing it to happen. And according to B&B spoilers, the kiss will lead to a catfight between Brooke and Taylor, and to a later argument between Brooke and Ridge.