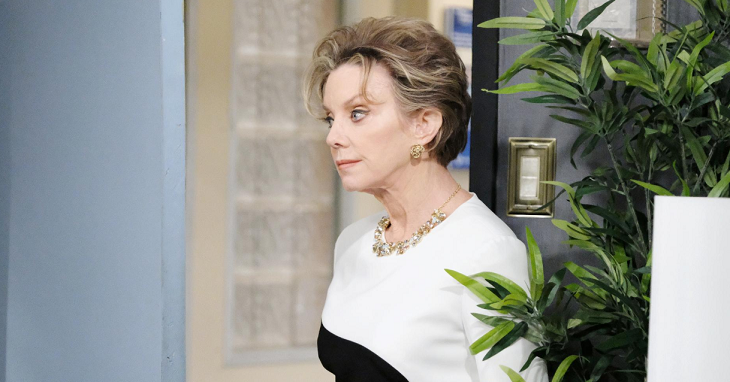 Days of Our Lives (DOOL) spoilers for Monday, March 25 find that Leo is going to receive some devastating news. There’s also a strong possibility that his mother Diana might be trying to blackmail him for going against her. Here’s what you need to know about what’s ahead on DOOL.

It’s without a doubt that Leo Stark (Greg Rikaart) won’t be happy when he will be forced to sign annulment papers to free Sonny Kiriakis (Freddie Smith) from his clutches. He also won’t be able to manipulate Sonny and Will Horton (Chandler Massey) to do what he wants anymore.

In the latest #DAYS, John and Leo get to know each other. https://t.co/ZsCmioRrzb pic.twitter.com/ltoEgczfQX

At least, that’s what Sonny and Will believe. Inside, this will leave Leo feeling very upset, hurt and angry. But from the outside, Leo will look like he’s turned another page in his life. That’s because he’s doing whatever it takes to impress his new father John Black (Drake Hogestyn). Either way, Sonny’s not stupid. He knows that Leo isn’t the kind of man that can be trusted.

Days of Our Lives spoilers indicate that Will will be in trouble. And while everyone will point their fingers at Leo, he will insist that he had nothing to do with Will’s collapse this time around. Leo insists that he wants to change his life around for the better, now that he’s under John’s wings. That, of course, will lead to the speculation that Leo’s mother Diana Cooper (Judith Chapman) might be behind Will’s sudden collapse.

Diana’s fingerprints are already all over Dr. Marlena Evans (Deidre Hall) incident. She was hoping to erase Marlena from the picture so she could have John all to herself. Little did she know though that it would be Leo that would end up standing in her way. Fans will soon realize that Diana is much like her son Leo. When she wants something (in this case, John), she will do everything in her power to get it, and will even destroy lives if she has to!

Days of Our Lives airs weekdays on the NBC network. Check your local listings for times. In the meantime, drop us a line with your thoughts in our comments section below. And as always, come back to Celebrating The Soaps for all the latest news, updates and spoilers on Days of Our Lives and all of your favorite daytime television shows right here!

Days Of Our Lives Alum Jen Lilley Is Pregnant, Announces She’s Having A Baby Girl