The Bold And The Beautiful Spoilers: Ridge Offers Sally A FC Job– Wyatt Stunned –Refuses To Work With Bill 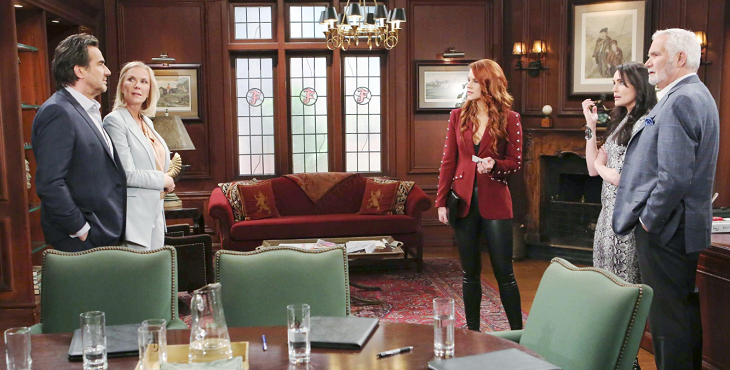 The Bold and the Beautiful (B&B) spoilers for the week of March 25 tease that Sally Spectra (Courtney Hope) will make a shocking decision about her future. She appreciates that Wyatt Fuller went out on a limb and made sure her fashion house was part of his deal with his dad to go back to Spencer Publications. But now, she isn’t sure that’s the right place for her to be. Especially after Ridge Forrester (Thorsten Kaye) gives her an offer she cannot refuse. Here’s what you need to know about what’s ahead on B&B.

B&B Spoilers— Sally Isn’t Sure About Working With Bill

While Sally is touched that Wyatt wanted to include her in his Spencer deal, she isn’t sure if she wants to work for Dollar Bill. She begins to rehash some of their history, including when Bill (Don Diamont) lied to Thomas Forrester (Matthew Atkinson) about Caroline Spencer (Linsey Godfrey) to break them up and blew up her building with her inside it.

Sally begins to wonder if it would be better if she did it alone or just stayed with Forrester Creations.

The Bold And The Beautiful Spoilers— Ridge Makes An Offer

Then, the seemingly impossible thing happens, Ridge dotes on Sally and her athletic line and makes her an offer to stay with FC. B&B spoilers say that he will tell her that they cannot lose her eye for details and he wants her to stay.

Of course, Sally will have to think about her options now. She knows that she doesn’t want Bill Spencer in charge of her company, but she feels obligated to accept that since Wyatt included her.

She begins to think about everything and she decides that she needs to do whatever is best for her. B&B spoilers state that she has spent her whole life on everyone’s term. For the first time, she wants to be in charge of her life and what happens to her.

The Bold and the Beautiful Spoilers: Brooke Accuses Taylor Of Using Steffy For Revenge On Hope — Is She Right? Vote Now!

According to Soap Opera Digest, Sally will make a decision to will shock Wyatt and could put a serious strain on their relationship. What do you think Sally should do?