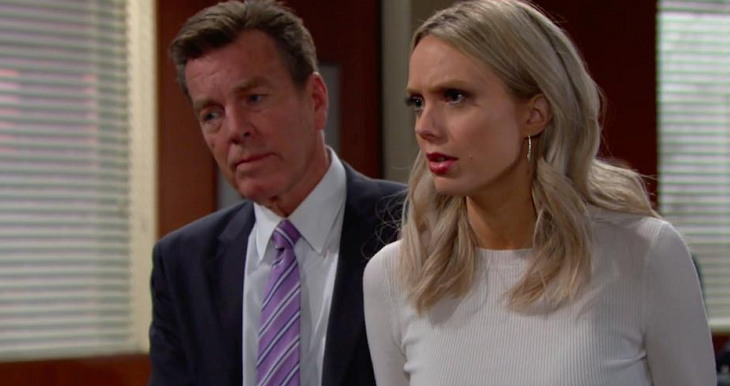 The Young and the Restless (Y&R) spoilers for the week of March 25 tease that more information will come out about Kerry Johnson’s (Alice Hunter) secret partner. Jack Abbott (Peter Bergman) cannot shake the feeling that he cannot trust his new girlfriend.

A mysterious call sets the stage for Jack to investigate what kind of game Kerry is playing. The truth will rock the Abbotts as they realize that she played everyone. Here’s what you need to know about what’s ahead on Y&R.

While Jack and Kerry enjoy a night out, Kerry gets a phone call. The contact is listed as PC. Y&R spoilers say that Jack teases her saying that she has a secret admirer. While he was joking, the comment seemed to irk Kerry.

And, Jack wasn’t happy he had to say anything either. The problem is Kerry has a history of not being completely honest with Jack and he’s getting frustrated by her big bag of secrets. The mysterious phone call is a red flag for Jack, possibly one that he can no longer ignore.

The Young And The Restless Spoilers — Kerry Gets A Package

Meanwhile, Phyllis Abbott (Gina Tognoni) receives a package addressed to Dominque Carroll. She wasn’t sure where this person works, and she wants to know which department to deliver the package. Y&R spoilers state Kerry appears and announces that is her intern and so she’ll take that for her.

Of course, Phyllis flips out and she wonders what is going on with Kerry. She begins to wonder if she can trust her. She decides to voice her concerns to Jack, who is already on high alert by Kerry’s strange behavior.

The mystery woman will turn out to hold a key role in Kerry’s exit. She will reveal a major secret that will rock the Abbott family and send them reeling.

What do you think is the big secret?