Days Of Our Lives Spoilers: Rafe Determined To Keep Ted Away From Hope — Digs Up Dirt To Drive Him Out Of Salem? 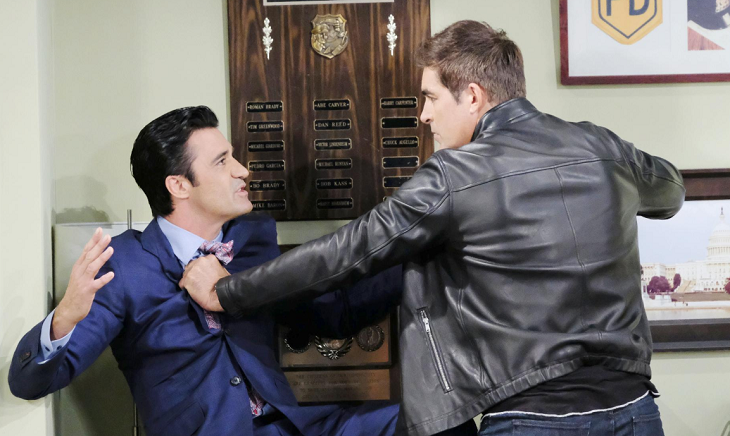 Rafe has decided to do an investigation on Ted, dig up some dirt on him, and hopefully, get him not only disbarred but out of Salem for good!

As far as Rafe is concerned, Ted has been after Hope since the first time he showed up in Salem after escaping the island he assumed Stefan DiMera (Brandon Barash) had imprisoned him on! Rafe is probably not far from wrong there.

Previously on #DAYS, Eli questions Hope about her relationship with Ted. https://t.co/ZsCmioRrzb pic.twitter.com/9NoNR0NTtG

Days of Our Lives spoilers say that Ted is obviously close to Hope, although he probably didn’t plan to be interim DA to get even closer. He’s probably a lonely man and gets closer than he should and more quickly than he should to his female friends, married or not.

The viewers will recall that when he first came to town he became romantically involved with Kate Roberts DiMera (Lauren Koslow), who had hired him to represent Leo Starke (Greg Rikaart) in his sexual harassment suit against Sonny Kiriakis (Freddie Smith).

That romance fizzled out when she learned that he was blackmailing Sonny and Will Horton (Chandler Massey), although it was actually Leo himself who was doing the blackmailing! Ted was involved in it outwardly, however! He took the pictures of Leo rolled up in the blanket in the trunk of the car when Will and Sonny supposedly killed him!

DAYS Spoilers– What Will Rafe Dig Up?

Rafe may be able to dig up some information about his part in the blackmail of Sonny and Will, and maybe of his playing dirty to help Theresa Donovan (Jen Lilley) get custody of she and Brady Black’s (Eric Martsolf) son Tate.

He also helped Ciara Brady (Victoria Konefal) in Ben Weston’s (Robert Scott Wilson) arson case, but a history of a lawyer taking bad clients to make a living really wouldn’t get him disbarred. Rafe would have to prove that Ted was complicit in the blackmail of Will and Sonny, but since that seems to be over and Leo’s signing the annulment papers, there really isn’t much left to use against Ted.

Stay tuned to Days of Our Lives and keep checking DOOL spoilers frequently to see all the latest news, developments, and spoilers!