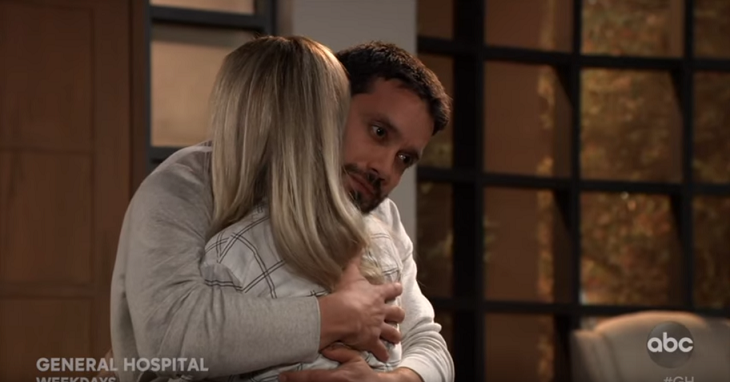 General Hospital (GH)  spoilers for Tuesday, March 26 tease that some relationships may be sealed, while others are questioned and others are desired!

First, it looks like Dr. Hamilton Chase (Michael Easton) and Detective Harrison Chase (Josh Swickard) may finally be establishing the brotherly relationship Chase has wanted for so long and are starting to bond! GH  viewers will see the two sitting at a table talking, and Chase will ask Finn if he knows what something feels like. Whether he is talking about something he is feeling, or possibly talking to his brother about Willow Tait’s (Katelyn MacMullen) fears of Shiloh Archer (Coby Ryan McLaughlin) is unclear, but there’s a good possibility it could be about either situation! But, at least they’re talking!

Next, Commissioner Jordan Ashford (Briana Nicole Henry) takes a phone call and gets a tip about a possible crime being committed. This could be the other side of the call that Alexis Davis (Nancy Lee Grahn) placed from Sonny Corinthos’ (Maurice Benard) home about Dawn of Day in Monday’s episode.

Then we see Dante and Lulu Falconeri (Dominic Zamprogna, Emme Rylan) catching up with Maxie Jones (Kirsten Storms). Dante is obviously out of the loop after having been in Turkey for so long; he is incredulous when he finds out Peter August (Wes Ramsey) has been spending time with his former partner the late Nathan West’s (Ryan Paevey) son! He’s not likely to care much for the idea, either!

Meanwhile, Peter August (Wes Ramsey) has been cornered by an obviously distraught Anna Devane (Finola Hughes) who is crying, and pleading with him, “I’m trying to pursue a relationship with you because I’m your mother!”

Back at the Corinthos compound, Alexis wants to know from Sonny what his and Jason Morgan (Steve Burton) have planned to handle the situation with their daughter Kristina Corinthos-Davis (Lexi Ainsworth) and rescuing her from Dawn of Day and Shiloh!

Outside Kelly’s, a ballistic Jason has Shiloh pinned against the wall in a chokehold and Shiloh is visibly struggling to breathe!