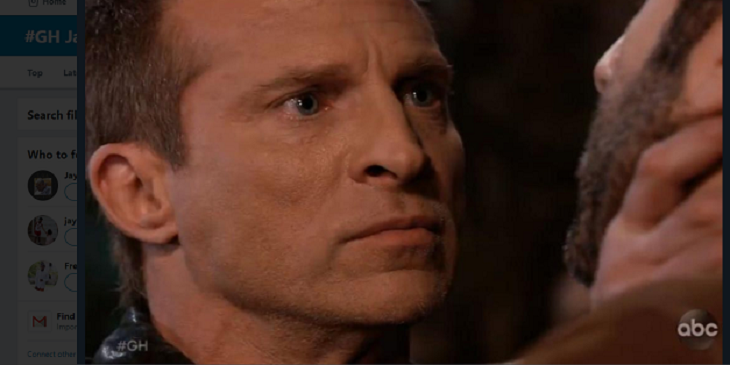 During this fight, Sam will be forced to take Shiloh’s side over Jason’s, to avoid ruining her plan of getting into Shiloh’s inner circle to rescue her sister Kristina Corinthos-Davis (Lexi Ainsworth). She has to be available to Shiloh 24/7 in order for Shiloh to trust her enough to tell her all the secrets! Jason wasn’t exactly happy with that plan, but that’s just the way it is.

Laura and Jason's unlikely pairing may mean the end of Ryan Chamberlain, West Coast. It's only a matter of time before he kills again. #GH55
An all-new #GH STARTS NOW on ABC! @GenieFrancis @1SteveBurton pic.twitter.com/nrqSc2H03q

Other General Hospital spoilers tease that Jason will be arrested as an outcome of this fight; Jason had been looking through the window at Kelly’s when Sam went to the ladies’ room and saw Shiloh at a table with their son Danny Morgan (T.K. Weaver) by himself, trying to ingratiate himself to Danny, and could have even been taken as insinuating he was his mom’s boyfriend. Jason didn’t like it, and the next thing you know, the two men were outside Kelly’s where Jason told Shiloh in no uncertain terms to stay away from his son!

General Hospital viewers can assume Jason will deliver the first blow, but it is certain that Shiloh will goad him into it! Then, someone will call the police, and Shiloh probably already has Dawn of Day people around who will attest to the fact that Jason started the fight, and probably even recorded it on their phones!

Sam may even be forced by Shiloh to tell the police that Jason attacked Shiloh unprovoked, which will be difficult for her, but she will have to do it to make her sting believable enough to be able to rescue Kristina! Of course, by that time Kristina may be the one doing the fighting, she will be so ingrained into the cult she’ll have to be dragged out kicking and screaming.

GH will have to hire a new psychiatrist trained in deprogramming! Stay tuned to General Hospital and keep checking General Hospital spoilers frequently to see the latest news, updates and spoilers!