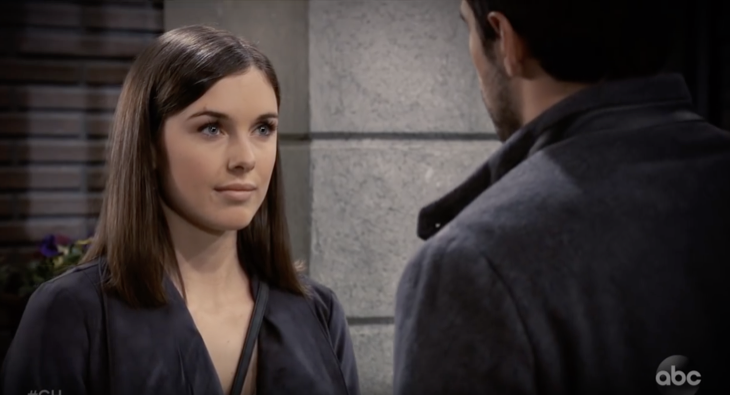 General Hospital spoilers tease that Willow Tait (Katelyn MacMullen) will confess what happened to her at Dawn of Day at the hands of Shiloh Archer (Coby Ryan McLaughlin) to Detective Harrison Chase (Josh Swickard). It won’t be easy for Chase to pry the intel out of Willow, but he knows by the way she was trembling with Shiloh in the classroom when he came in response to her text that whatever he did to her, it was BAD!

He also confirmed what many General Hospital viewers have been suspecting, that Shiloh is the father of Willow’s child. Of course, no one but Brad Cooper (Parry Shen), Julian Jerome (William DeVry) and Willow herself know that she is Wiley Cooper-Jones (Eric and Theodore) birth mother, and no one but Brad and Nelle Benson (Chloe Lanier) know that Willow’s baby died of crib death, or SIDS (Sudden Infant Death Syndrome) and that Wiley is really Jonah Corinthos! Dr. Liesl Obrecht, (Kathleen Gati) however, knows that Nelle did something with her healthy baby because she delivered him!

Shiloh doesn’t seem to know about the baby, he only demanded Willow herself to come back. It appears that out of all those women with the brand on the bottom part of their back, Willow was his “chosen one” which sounds like a queen and concubine arrangement; however, Harmony (Inga Cadranel) sounds like she once held that position as well! He told her she took vows of some sort with him, and they were “destined” to be side by side. Willow, on the other hand, demanded him to leave, and when he wouldn’t, texted Chase to come immediately!

When Chase came and chased Shiloh out of the room, Willow was smart enough to bluff to Shiloh that Chase was a parent there for a meeting, but Chase let him know in no uncertain terms that he was a cop! Willow told Chase she had to cancel their weekend together and that she was leaving Port Charles, but other General Hospital spoilers tease that Elizabeth Webber Baldwin (Rebecca Herbst) will call Willow by the middle of the week.

It sounds like Chase will convince her he can help and that she won’t turn her resignation letter in after all. Monica Quartermaine (Leslie Charleson) will also ready her home for a houseguest; could that be Willow? She did tell her landlord she’d have to break her lease!

It sounds like forces from many different sides are getting ready to converge on Shiloh and the Dawn of Day cult; stay tuned to General Hospital, and check General Hospital spoilers frequently to see how and who takes down Shiloh and his creepy cult!