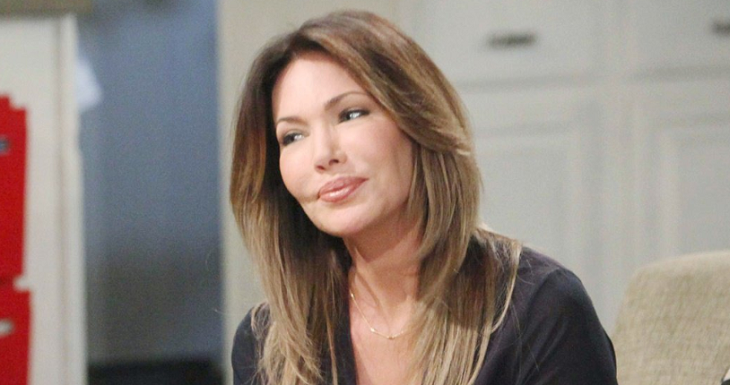 The Bold and the Beautiful (B&B) spoilers for Tuesday, March 26, tease that the escalating argument between Brooke Forrester (Katherine Kelly Lang) and Taylor Hayes (Hunter Tylo) will rage on. The women are furious with each other and their altercation has begun to get physical, with Brooke putting her hands on Taylor and provoking her into a possible catfight.

Of course, the whole thing started when Brooke saw Taylor kiss Ridge Forrester (Thorsten Kaye) and heard her tell him that she never stopped loving him. That outraged Brooke, who immediately confronted Taylor and blasted her for her actions.

And things really got out of hand when the women started to discuss their daughters. Taylor made it known that she was still vying for Steffy Forrester (Jacqueline MacInnes Wood) to reunite with Liam Spencer (Scott Clifton), and Brooke about lost it. Brooke is livid that Taylor would seek to rob Hope Spencer (Annika Noelle) of her husband so soon after the loss of her daughter.

According to B&B spoilers, the whole situation will continue to escalate on Tuesday’s episode. It seems that the ladies will get loud enough to alert Ridge to the situation, and he’ll rush to the scene to intervene. Fortunately, he’ll break up the women before the whole thing gets too physical.

But of course, after Taylor leaves, Ridge will have to deal with his own accusations from Brooke, who won’t be happy about seeing him kissing Taylor. B&B spoilers indicate that Brooke will want to get Ridge’s side of the story, but that she won’t be entirely satisfied with his explanation that Taylor kissed him and not the other way around.

Meanwhile, on the new episode of B&B on Tuesday, March 26, Wyatt Spencer (Darin Brooks) will continue to lend a sympathetic ear to his brother Liam. He is dealing with a lot right now, with both the death of his daughter and with Hope’s recent behavior, and he really needs his brother’s support.

Liam and Wyatt will discuss everything that’s been going on with Hope lately, including her recent attempt to push Liam to get back together with Steffy. And according to B&B spoilers, Wyatt will have some tough questions for Liam, most likely about his feelings for Steffy. He may want to know whether there’s a part of Liam that would like to reunite with his ex.

Chances are, Liam will deny wanting to reunite with Steffy and Kelly Spencer (Chloe Teperman and Zoe Pennington), at least at first, but it looks like Wyatt might push the issue. Wyatt doesn’t necessarily want to see Hope and Liam break up, but he is interested in seeing Liam address the truth about how he feels. Will Liam admit that there is a part of him that would like to be a family with Steffy and the girls?

The Bold And The Beautiful Spoilers: Has Bill Spencer Really Changed? Vote In Our Poll!