Welcome to your Tuesday, March 26 General Hospital recap! We begin our day at Lulu’s (Emme Rylan) house where she is waiting for Dante (Dominic Zamprogna) outside. Dante opens the door and it’s a surprise welcome home party! His mother, Olivia (Lisa LoCicero) runs up and hugs him.

In the park, Anna (Finola Hughes) is crying and Peter (Wes Ramsey) asks if she’s okay. At Charlie’s, Finn (Michael Easton) is sitting at a table when his brother Chase (Josh Swickard) comes to join him. Chase tells Finn that Willow’s (Katelyn MacMullen) ex is in town. At Sonny’s (Maurice Bernard) house, Alexis (Nancy Lee Grahn) is wondering how he’s going to handle Shiloh.

Outside Kelly’s, Shiloh (Coby Ryan McLaughlin) tries to convince Jason (Steve Burton) that maybe he should join Dawn of Day. Jason attacks him and throws him against the wall in a chokehold. Sam screams out as Shiloh collapses. Sam runs over to help Shiloh as a waitress says she’s going to call 911.

GH spoilers state that Shiloh says he is fine and does not need to go to the hospital. Shiloh blasts Jason as abusive and is happy that Sam got away from him. Chase shows up to get reports of what happened with the fight. Shiloh and Sam go down to the police station to make statements.

At Sonny’s home, Alexis and Sonny argue about how to handle Shiloh. Sonny says” the less she knows the better about the plan.” Alexis calls Jordan to tell her “someone is targeting Shiloh from Dawn of Day.” Alexis says she doesn’t have a plan, but Sonny says he will save Kristina.

Olivia is super excited that Dante is back. Ned (Wally Kurth), Michael (Chad Duell) and Maxie (Kirsten Storms) are all there. Jordan and Curtis (Donnell Turner) give him hugs as he flashes back to loading the silencer gun. Jordan (Brianne Nicole Henry) says that his desk at the police station is ready for whenever he wants to return to work.

GH spoilers say that Lulu looks at Dante suspiciously as he walks away to check on the kids. Maxie, Dante, and Lulu look at pictures of her babies and Peter comes up in the conversation. Maxie asks them to her son’s godparents.

Laura (Genie Francis) and Ned are in the kitchen discussing what happened with Ryan. Lulu browbeats Maxie about her relationship with Peter. GH spoilers reveal that Michael and Dante catch up about Nelle and the baby situation. He also tells Dante that Kristina is in a cult, as Dante flashes back to loading his gun. Olivia is crying and says she’s been sick with worry the whole time he was gone. They catch up as she tells him how much he means to her (amazing scenes) and he’s a hero.

Jordan tells Curtis she needs to look into Dawn of Day, something about Alexis’s call irked her.

Finn tells Chase that Anna has an identical twin sister named Alex. Chase’s beeper rings and he needs to leave to Kelly’s. Anna shows up at Charlie’s and she talks about Griffin leaving town. 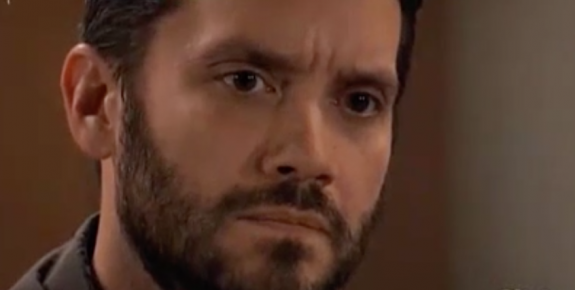 Anna tells Peter that Griffin has left town and she should have been there more for him. Peter says maybe she feels like Griffin is the son she never had. Anna says that he never answers her calls or texts. Peter says that she gave him up, she didn’t want him.

General Hospital spoilers state that Anna says that she was really young and overwhelmed, giving him up was for the best. Peter cries out that a baby could have fit into her plans and he feels abandoned. Anna asks if he will ever be able to forgive her. He says all that she sees is the pain of Faison when she looks at him.

Dante flashes back to shooting Lulu and angrily flips an entire dining table over that’s covered in food. At the jail, Jordan is arresting Jason as Shiloh smugly looks on….. flash to preview