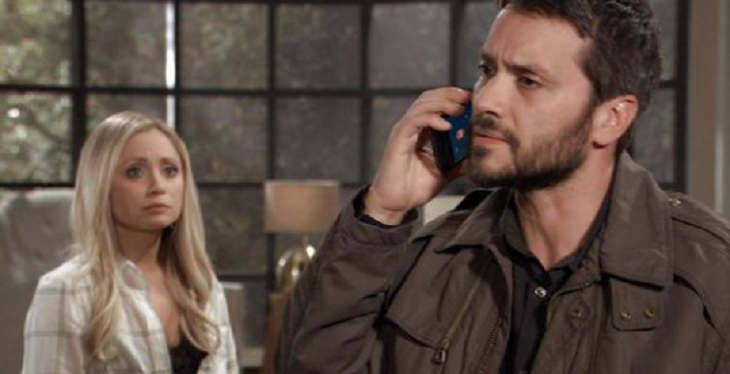 General Hospital (GH) spoilers tease that now that Dante Falconeri (Dominic Zamprogna) is home from Turkey with his wife Lulu Falconeri (Emme Rylan) happily ever after might be too good to be true! Dom’s only back for ten episodes, and a few of them have aired already!

What will General Hospital writers do with Dante, and will it be permanent, or something more open-ended that would allow Dom to reprise Dante every so often? Or will they look to do a recast?

One other General Hospital storyline that seems to be finished, but may actually not be, is the Ryan Chamberlain (Jon Lindstrom) storyline. In March 22nd’s episode, Commissioner Jordan Ashford, (Briana Nicole Henry) DA Margaux Dawson, (Elizabeth Hendrickson) and Mayor Laura Webber (Genie Francis) were in a meeting about that very subject, and Dante, as an employee of the PCPD, will likely be going back to work at least for a couple of episodes.

SNEAK PEEK: We need to talk about Dante. https://t.co/7yZxlBRse0 #GH55

The meeting was about the search for Ryan’s body, and the Canadian and United States police that were involved in the search had both given up and declared Ryan presumed dead. Of course, someone who crawled out of a burning funhouse intact and reappeared twenty-five years later is probably not going to be dead this time either.

Other General Hospital spoilers tease that he may have made a phone call to Ava Jerome (Maura West) in the same episode but didn’t speak to her! Julian Jerome (William DeVry) grabbed the phone out of her hand and warned him not to ever come near his sister again! There was way too much discussion among several General Hospital characters about not believing Ryan was dead until there was proof for the viewers to believe he really is dead either!

One possible outcome for Dante that could either turn out to be a permanent exit or a temporary one allowing for a recast would be to have him encounter Ryan Chamberlain and try to take him down! Sonny Corinthos (Maurice Benard) also talked with Jason Morgan (Steve Burton) and put a call out to his contacts to find Ryan, and since Sonny found Dante when no one else could, it’s quite likely this is how Ryan will be found and possibly even within Port Charles!

Dante could either be assigned to arrest him, and Ryan could overpower him, or Dante could be defending Lulu against Ryan. GH writers could either choose to have Ryan kill Dante or injure him in the face badly enough to need plastic surgery and therefore have a way to do a recast.

General Hospital Spoilers: Liz Checks In With Willow– Is It A Clue That The School Teacher Stays In Port Charles?

As far as who takes down or kills Ryan, that could be Sonny, Ava, or Julian or maybe all three! Stay tuned to GH and keep watching General Hospital spoilers for all the latest news and spoilers!