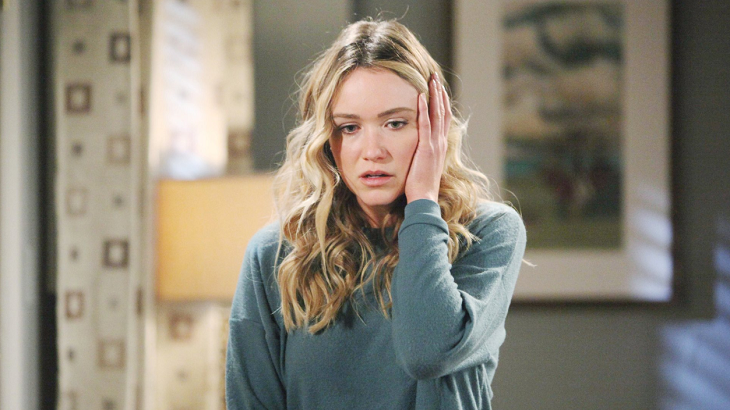 The Bold and the Beautiful (B&B) spoilers for Wednesday, March 27, tease that Florence “Flo” Fulton (Katrina Bowden) will spend some time with Wyatt Spencer (Darin Brooks). Wyatt’s been very welcoming to Flo since they bumped into each other at Bikini Bar a while back, and he’ll probably want to hear about how things are going for her and what her future plans may be.

Wyatt knows that Flo is from Las Vegas and that she was thinking about moving back there, but B&B spoilers say that during their conversation, he’ll ask her to consider staying in Los Angeles. Flo will be touched by Wyatt’s words, and she’ll also be surprised to see Wyatt’s mom, Quinn Forrester (Rena Sofer), whom she hasn’t seen in years.

Quinn will remember Flo from back when Flo and Wyatt were in high school, and she’ll gush at what a beautiful young woman Flo has become. It looks like Quinn will quickly develop a desire for Flo and Wyatt to reconnect, and all of her gushing will be flattering for Flo, who will welcome the attention.

But B&B spoilers say that all of Quinn’s fawning over Flo won’t be appreciated by Sally Spectra (Courtney Hope), who will end up feeling slighted and disrespected by Quinn’s actions. It will seem to Sally that Quinn would rather Wyatt be with Flo than with her, and this will irritate Sally, to say the least.

Bold And The Beautiful Spoilers– Sally Gets A FC offer

Meanwhile, on the new episode of B&B on Wednesday, March 27, Sally will get an unexpected offer. Ridge Forrester (Thorsten Kaye) will take a look at Sally’s athletic wear designs, and he’ll be immediately impressed. In fact, he’ll be so impressed that he’ll make Sally a lucrative job offer.

This will put Sally in a bind, as she’s in the process of leaving Forrester Creations to start up the new “Spencer Fashions” division of Spencer Publications. She thought the matter was settled and that she’d be going to Spencer for the awesome opportunity to run Spencer Fashions that Wyatt arranged for her with Bill Spencer (Don Diamont).

But B&B spoilers say that Ridge will make an offer for Sally to stay at Forrester and that this offer will be difficult to refuse. In fact, it’s possible that Ridge will offer Sally creative freedom over an athletic line of her own, or he could even offer her Thorne Forrester’s (Ingo Rademacher) now-vacant position. Sally will be touched and very tempted by the offer.

It looks like Sally will need some time to mull over the offer, which will probably shock Wyatt, who was under the impression that their joint move to Spencer was a done deal. But B&B spoilers say that Sally will recognize what a great opportunity Ridge’s offer is, and she’ll need to weigh her options carefully as she makes one of the biggest decisions of her career.