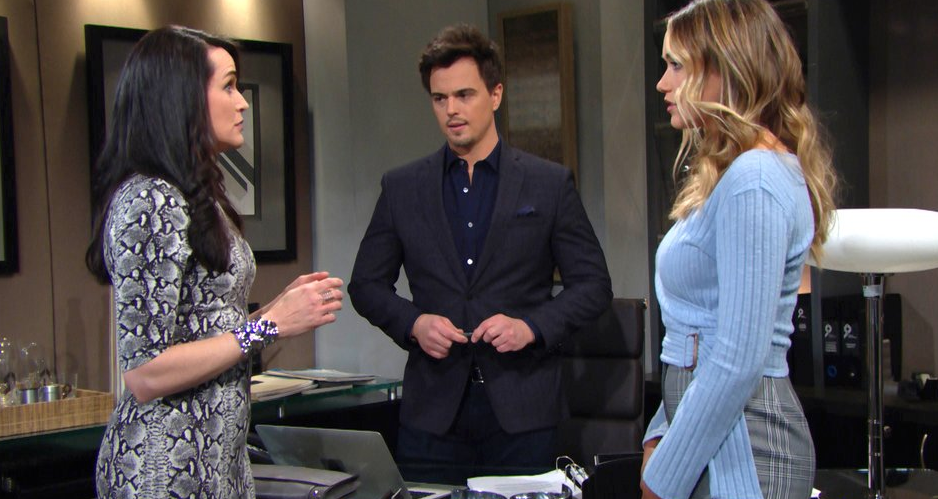 The Bold and the Beautiful (B&B) spoilers for Thursday, March 28, tease that Quinn Forrester (Rena Sofer) will be put on the spot. Wyatt Spencer (Darin Brooks) has just demanded that Quinn apologize to Sally Spectra (Courtney Hope) for totally gushing over Florence “Flo” Fulton (Katrina Bowden) and going on about how great Flo and Wyatt used to be together.

Sally, unfortunately, heard Quinn’s whole spiel, and Wyatt wasn’t amused. He recognized his mother’s conniving behavior and realized that it was being completely disrespectful of both Sally personally and of his relationship with Sally.

Of course, Quinn will probably play little miss innocent and claim that she was just reliving the past and not intending to hurt anyone. But according to B&B spoilers, Wyatt will stand his ground with his mother and demand that she apologize to Sally. It looks like Quinn will offer a reluctant apology for her words and for marginalizing Sally.

Smiling because Sally’s career is taking off! What do you think – should she stay at Forrester or go to Spencer? #BoldandBeautiful pic.twitter.com/j640BEVDxe

Unfortunately, this may only be the beginning of “Wally’s” problems with Quinn. Now that Sally knows that Quinn prefers Flo for her son, Sally will probably feel uneasy around Quinn going forward. And there could also be some tension between Sally and Flo in the future as well. Up until now, Sally didn’t feel threatened at all by Flo, but that might change now.

Next, on the new episode of B&B on Thursday, March 28, Sally will have another unpleasant situation ahead of her. Once Quinn and Flo leave the scene, she’ll need to have a serious talk with Wyatt. She’ll tell Wyatt that she’s suddenly rethinking her decision to leave Forrester Creations for Spencer Publications.

Sally will tell Wyatt all about how Ridge Forrester (Thorsten Kaye) just made her a lucrative offer to remain at Forrester. B&B spoilers say that Wyatt will be shocked by the news, and his first instinct will likely be to assume that Sally turned down the offer flat.

He’ll be further stunned to learn that Sally is actually considering the offer and may not be joining him at Spencer. Wyatt went to a lot of trouble to get Bill Spencer (Don Diamont) to help Sally resurrect her fashion house at Spencer, and he may feel a bit slighted that Sally is considering turning her back on the opportunity. But as he hears more about Ridge’s offer, he’ll probably decide that Sally is right to at least consider it, and he’ll likely offer his support to her in whatever decision she makes.

Still, if Sally does decide to leave the opportunity at Spencer on the table, it could potentially drive a wedge between Sally and Wyatt. And it will surely affect their relationship somewhat since they won’t be working together as a united front going forward. But it all depends upon which path Sally chooses.