Days Of Our Lives News: Judith Chapman Is Out As Diana Cooper–Will She Take Ted Down Before Her Exit? 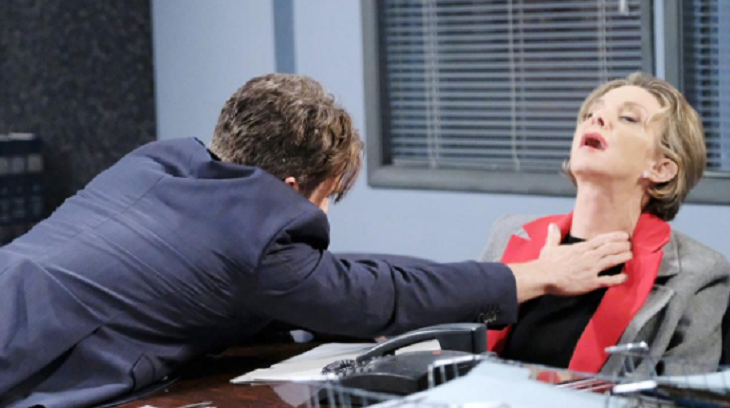 Days of Our Lives (DOOL) spoilers tease that Judith Chapman, who has been playing Diana Colville Cooper is also leaving the show, as expected after TV son Greg Rikaart (Leo Stark) announced his final appearance. Like Greg, Judith did not announce her final airdate but since Days of Our Lives tapes six months ahead, there could be a few more scenes that she may be in.

Diana was recently trapped as Dr. Marlena Evans’ (Deidre Hall) assailant as a result of a joint effort between John Black (Drake Hogestyn), Marlena herself, and Eli Grant (Lamon Archey) and Lani Price (Sal Stowers). Leo himself even accused his mother of the murder attempt.

Several sources including soaps.com published Judith’s exit based on one of her Facebook posts, where she is quoted from her post, “OHH, JOHN, DARLING….You can’t possibly suspect me…???” POOR DIANA….ADIOIS DIANA…”

The “adiois” is probably a misspelling of the Spanish “adios”, meaning “goodbye”. Of course this pertains to the scene where Diana was caught breaking into Commissioner Hope Brady’s (Kristian Alfonso) office to steal the evidence Diana was afraid would incriminate her, namely the IV bag and tubing from Marlena’s hospital room, that had been injected with more penicillin, and found John and a pair of handcuffs waiting for her instead!

Days Of Our Lives Spoilers– Does Diana Have Dirt On Ted?

Diana’s last scene was with interim DA Ted Laurent, (Gilles Marini) who Diana appeared to have some dirt on, as well as some romantic history, asking him about his wife.  After he told her she died of cancer two years ago, she told him she saw her six months ago in France!

Ted, of course, looked extremely uncomfortable, and Days of Our Lives viewers figured and other spoilers tease that Diana wanted to use that information to leverage Ted to get the charges dropped or reduced.

Ted may not have a lot to work with short of agreeing to an insanity plea! Whether Days of Our Lives producers are going to let this trial play out or everything happens off screen remains to be seen.

Stay tuned to Days of Our Lives and keep checking here frequently to see all the latest news, updates, and spoilers, and Judith’s last airdate when it’s announced!