Welcome to your Thursday, March 28 General Hospital recap! We begin our day with Anna (Finola Hughes) and Finn (Michael Easton) are discussing Alex. Finn tells Anna that Alex said she would never be good enough for him.

At the Metro Court, Dante is having a drink when Carly (Laura Wright) approaches suddenly. She says she didn’t mean to startle him and that he’s been gone too long. Carly says she’s sorry she couldn’t make it to the party and Dante says congratulations on the new baby. The bartender makes a loud noise and startles Dante who grabs a knife, which Jason tries to pull away from him. Carly and Jason tell him to “stand down” and he releases the knife.

Carly and Jason discuss what happened with the knife and are worried about Dante. She asks about his attack on Shiloh and what happened. Jason says that now Shiloh knows to be afraid of him.

Dante makes a phone call to someone and says “he has a problem.” Dante leaves the Metro Court and meets up with Anna. He explains what happened with the knife and he thinks he may have been brainwashed. Anna explains about her horrible experience with brainwashing many years ago. Anna says she knows of a place he can go that’s almost like rehab, with therapy, and behavior modification. Anna says he needs to leave Port Charles as soon as possible.

Oscar (Garren Stitt) and Joss (Eden McCoy) discuss the nurse’s ball and which act they are going to do. Cameron (William Lipton) shows up while he’s doing his hospital community service. Oscar explains to Cameron that he can’t take any more road trips, he’s dying soon.

In Monica’s (Leslie Charleson) office, Kim (Tamara Braun) and Drew (Billy Miller) are discussing the brain tumors growth. Drew tells Monica that Oscar only has a few weeks and they need to prepare him for the end. Monica asks if they are ready to put him in short term care where he can be watched. Kim leaves the room upset and Monica asks Drew if he’s okay. Monica tells Drew he needs to break something, let his anger out – release his pain. Monica suggests that Kim and Oscar move into the mansion for his final days. 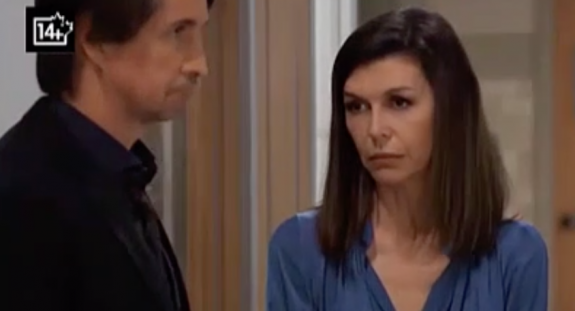 Willow has decided to stay in Port Charles and wants to face Shiloh down. Willow kisses Chase and heads over to Kelly’s to meet Liz about Aiden.

At Kelly’s, Nina says to Liz that she’s happy that Willow is leaving and the kids will be better without her. Willow shows up and Nina leaves but is eavesdropping from the bar.  GH spoilers state that Willow tells Liz that she has decided to stay in Port Charles. Nina and Valentin are in the corner being mean about Willow. Willow approaches them and says she is staying in Port Charles. Nina threatens to get her fired from the school.

Anna asks Robert (Tristan Rogers) to go to London and investigate a scientist. She’s still confused about which memories are hers and which are Alex’s. Robert says he wants Anna happy, but the past always comes back to bite her.

Anna shows up at the hospital as Robert is leaving, Finn grabs her and kisses her on the lips. At Lulus house, Dante comes back and says immediately that he needs to leave again. … flash to preview