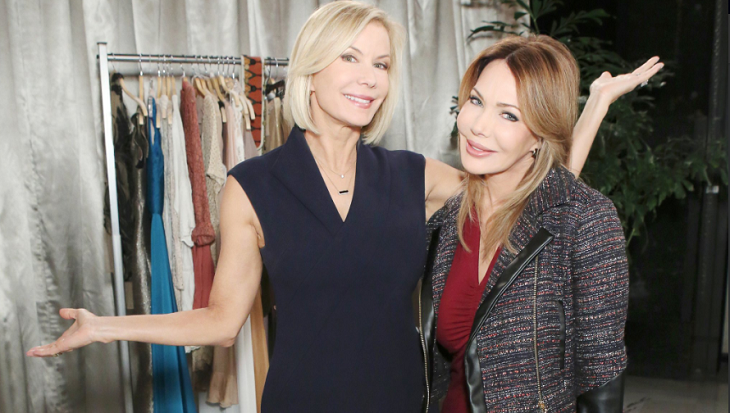 The Bold and the Beautiful (B&B) spoilers for Friday, March 29, tease that Bill Spencer (Don Diamont) and Katie Logan (Heather Tom) will be struck again by cupid’s arrow. The two exes have been spending quite a bit of time together lately. Katie has really been there for Bill in the aftermath of Caroline Spencer’s (Linsey Godfrey) death, and it has brought the two closer. And they also enjoyed a nice lunch together at Il Giardino, courtesy of an anonymous matchmaker who appears to be pushing the two together.

Well, now their secret matchmaker s going to strike again. This time, Bill and Katie will be treated to a surprise dinner for two. According to B&B spoilers, Katie will drop by Bill’s office, and they’ll discover that someone has arranged a romantic dinner for two to be brought in. What’s more, their meal will have been prepared by the famous Chef Chambre, played by reality TV star Tamar Braxton.

B&B Spoilers– Bill And Katie Are Set Up Again!

Katie and Bill will enjoy their special evening together, and they’ll wonder exactly who is behind all the matchmaking efforts. First on their list of suspects will probably be Justin Barber (Aaron D. Spears) and Donna Logan (Jennifer Gareis), since they have each made it known that they support a “Batie” reunion. But viewers know that Justin and Donna have been making comments suggesting that it’s not them.

So, if it’s not Justin or Donna, who could be the matchmaker? Well, it could be Wyatt Spencer (Darin Brooks) and Sally Spectra (Courtney Hope), since they’ve been in discussions with Justin and Donna about helping to foster a “Batie” reunion. But what if the matchmaker is none other than Will Spencer (Finnegan George), Bill and Katie’s son? B&B buzz suggests that it could be Will, which would be a fun reveal.

We’ll see if Bill and Katie make any headway in figuring out who’s behind their romantic dinner as they enjoy their evening together. It should be fun to watch them try to guess who it is as they dine away and enjoy each other’s company.

Meanwhile, on the new episode of B&B on Friday, March 29, Ridge Forrester (Thorsten Kaye) will impart some knowledge onto Brooke Forrester (Katherine Kelly Lang) that will leave her frustrated and angry. Shortly before Taylor Hayes (Hunter Tylo) kissed Ridge, she shared her observations regarding Hope Spencer (Annika Noelle) and her hope that Steffy Forrester (Jacqueline MacInnes Wood) and Liam Spencer (Scott Clifton) would reunite.

Taylor’s theory, in a nutshell, was that Hope could go be a mother to Douglas Forrester (Henry Joseph Samiri) now that Caroline was gone, and that Hope and Thomas Forrester (Matthew Atkinson) might be a good pairing. That would free up Liam for a “Steam” reunion.

B&B spoilers indicate that Brooke will be outraged to hear Taylor’s wish. Luckily for Taylor, it appears that she’s gone to Paris to be with Steffy, otherwise she’d likely get an earful and more from Brooke. Brooke is surely not going to stand by and watch her daughter’s marriage be broken apart so that Taylor’s daughter can have him.

At any rate, Brooke will likely be more determined than ever to support Hope and her marriage to Liam, but it might be difficult since Hope does appear to be pulled in the direction of Douglas and Thomas. Brooke might have her work cut out for her!